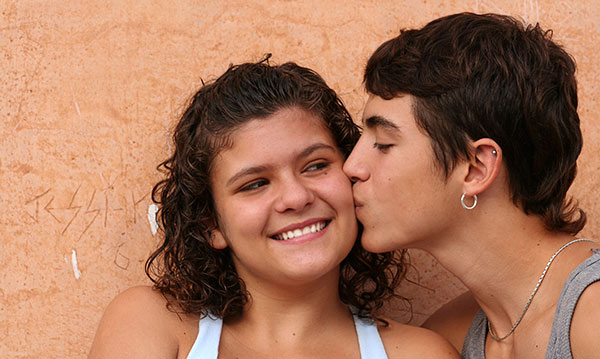 Some parents are outraged after a 13-year-old boy was charged with second-degree assault for kissing a 14-year-old girl on a dare.

The story has made headlines across the country over the past several days with articles on CBS News, the Washington Times and other news outlets detailing how police had to get involved after the middle schooler kissed a girl at school against her will.

For many, the initial reaction is one of surprise: Criminal charges for kissing a classmate on a dare? Why not handle it in the school setting?

You might even picture the scenario of a boy going up to a girl and giving her a tiny, tight-lipped peck on the cheek before running off. It might seem pretty innocent – the sort of thing that could surely be dealt with by the principal.

But what’s actually detailed in the police report tells us a different story and we’re not sure everyone is paying attention.

The Baltimore Sun reports, in part: “A 14-year-old girl, an eighth-grader at Pikesville Middle School, told police Wednesday that a 13-year-old boy grabbed her by her shirt, pulled her toward him and ‘open-mouth kissed her with his tongue,’ according to police. The girl said she was kissed against her will.”

The boy, who was not taken into the police station to be processed, told police he did it on a dare. He was charged as a juvenile and released to his mom, the newspaper reports. He’ll also face disciplinary action at school, according to reports.

Any unwanted affection in the school setting – or anywhere – demands a response and the description of what happened in this case makes it sound a lot more troubling than some might assume from only reading a headline.

So was it necessary to contact the authorities over the situation? I think so. The school is right to have a “zero tolerance” policy on assault and taking it seriously sends a message to the student and everyone else at the school who might consider pulling a similar stunt.

But others aren’t so sure. In the comments section of this article on The Stir about the situation, Maria Higgins writes, “I am so sick of our current societal norms! This is crazy! Maybe, MAYBE, the school can reprimand him but CHARGES?! What have we become?”

Other people believe the police action was justified.

“After reading the description of this, I actually CAN understand why the boy is being punished and was ‘arrested.’ You can’t just ‘manhandle’ a girl by grabbing her in the way he did,” user STEVE2010M commented on the CBS News article. “As described, she had no way to say ‘no’ or reject his kiss attempt. I’d be pretty furious if this were my daughter.”

What do you think? Should the boy face assault charges? Tell us in the comments section below.