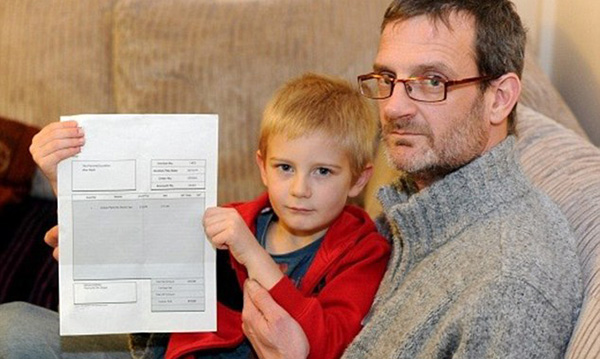 One British mom didn’t think it was so crazy when her son’s 5-year-old friend failed to show to the birthday boy’s party. Now, she expects the boy’s parents to pay 15.96 pounds or $24 for his absence. She’s sent him an official invoice and is threatening legal action if he doesn’t pay, according to BBC News.

The story goes like this: Julie Lawrence had planned a huge shindig for her son’s birthday at the Plymouth Ski and Snowboard Centre. Alex Nash accepted the invitation before Christmas, BBC News says.

Close to party day, however, Nash’s parents realized that their son was double-booked and had made plans with his grandparents.

According to an article in the Huffington Post, Alex’s dad, Derek Nash, says he and his wife asked Alex what he preferred to do – and he chose to see his grandparents.

So, Alex skipped the party with no notice. Dad claims he didn’t have contact information for Lawrence – and well, the no-show didn’t sit well with the birthday boy’s mom. Alex’s parents discovered an invoice demanding the 15.96 pounds (or $24) no-show fee in a brown envelope in the boy’s book bag.

As of now, it doesn’t look as though Alex’s dad, Derek, will be paying the fee and has been told he will be taken to small claim’s court, but it isn’t the money that he is worried about.

“I can understand that she’s upset about losing money. The money isn’t the issue, it’s the way she went about trying to get the money from me,” dad tells the BBC. “She didn’t treat me like a human being, she treated me like a child and that I should do what she says.”

So far, loads of Internet users are calling Lawrence out for her actions and are siding with the Nash family on this one.

“…The fact is that the little boy was ‘invited’ to the party. He wasn’t invited to pay his way to attend,” Daily Mail reader DanW1981 of Fareham writes. “If you are invited to an event where there is a burden of cost, it is implied that the invitee does not share that burden unless it is stated as a condition of accepting the invite. For what it’s worth, I’d have just swallowed the loss. In most cases it’s not done on purpose.”

It seems like British court might see things this way too. As the BBC article points out, a party invitation does not “create legal relations with either the child ‘guest’ or its parents.” If they argue that there is a contract with the child, it is “inconceivable that a five-year-old would be seen by a court as capable of creating legal relations.”

So, what do you think Metro Parent readers? Are the boy and his parents liable for the $24, or has momma Lawrence taken things way too far?