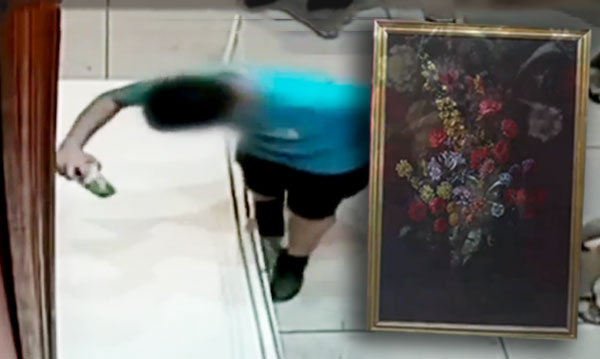 Most parents can relate to the feeling of their child accidentally breaking something really expensive.

For most of us, the worst our kids have done is stain a nice couch, break a glass vase or maybe spill juice on a friend’s designer jeans.

But for the parents of a boy in Taiwan, the damage – financially and probably emotionally – was a little more serious. The 12-year-old boy was visiting an area museum with a school group and tripped, breaking his fall with a painting and punching a hole in it in the process. The painting turned out to be a 350-year-old Paolo Porpora piece valued at $1.5 million, the Guardian reports.

The cringe-worthy moment was caught on video and is making its rounds on the Internet this week, with various versions of the clip getting hundreds of thousands of views on YouTube.

The boy, who was carrying a drink as he walked through the Face of Leonardo: Images of a Genius exhibition in Taipei, and his family will not be held responsible for the damages since the painting was insured and it was clearly an accident, the Guardian reports. The repairs are currently underway.

Tsai Shun-Jen, the chief conservator for the exhibition, told the publication that the painting was fragile due to its age.

“When we start working on the painting’s restoration, the priority is to strengthen its structure, not retouching the paint on the damaged area,” he says in the article.

Fortunately, no one in any official capacity seems to be blaming the boy or his parents for the accident. Unfortunately, though – and not surprisingly – people reading about what happened are quick to question why the boy was carrying a drink and whether he should have been there in the first place.

“The kid didn’t belong there,” one reader on the Guardian’s website writes. “The security for the painting was inadequate: a rope protecting an artwork? Please. Both the kid (who should never have been allowed in the gallery with a drink) and the setup people are at fault here.”

Another commenter chimes in, “What is he doing holding a drink in there, walking so close to the painting – and did he even know what the painting is?” and a later post questions whether the fall might have been intentional.

It’s a shame the painting was damaged, but it’s more of a shame that anyone would put any blame on a pre-teen boy who was innocently exploring the gallery. Something similar could happen to any of us – or our kids – at our next visit to a local museum. Famous artwork aside, what’s more important is that the boy wasn’t hurt when he fell.

Accidents do happen, of course, and the way we see it, we’re just glad this kid and his school group were getting some real-life (or hands-on, you could say) exposure to the arts.

What’s the most expensive thing your child has accidentally damaged? Tell us in the comments.