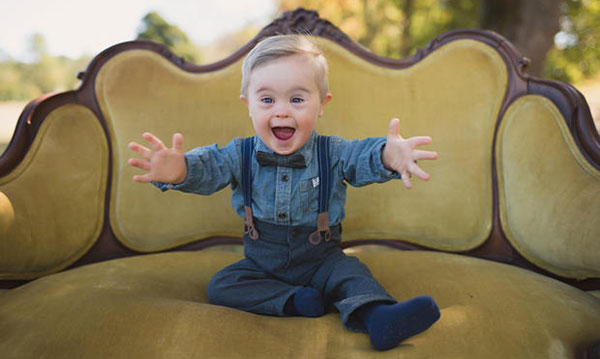 There’s no doubt about it. Little Asher Nash is adorable – and clearly loves the camera.

So when his mom, Meagan Nash, submitted his photo to a modeling agency’s search for an OshKosh advertisement and didn’t hear back, she asked why – and was absolutely not OK with the response she got from the agency.

According to a report from CBS News, the agency turned Asher down because, “the criteria didn’t specify the company was looking for a baby with special needs.”

“That puzzled me and so I asked if they had said they did not want a baby with special needs,” Asher’s momma told CBS News. “When she said, ‘No, that they didn’t specify either way,’ I asked why we wouldn’t always submit him then?”

Then, she took to Facebook, posting Asher’s photo on the Change the Face of Beauty page, and her story was then shared by Kids with Down Syndrome, CBS News notes.

“I would love for OshKosh to meet my son and see what we see in him,” Nash told news outlet The Mighty. “I don’t want them to use him because of this fuss we are making on the Internet. I want them to use him because they value him and see how much he could contribute to their advertisement. Children with Down syndrome and other disabilities are incredible human beings, and we want OshKosh to want to help change the world’s perception.”

Apparently, OshKosh noticed the buzz and will be meeting with Asher sometime soon, CBS News reports.

Fingers crossed he gets the gig!

We love that this mom spoke out and did so in such a meaningful way. Through her post, she created some awareness for the equal treatment and consideration of kids with special needs. There are so many opportunities for businesses to show kids and families of all kinds, which I think would resonate with people in such a positive way. Specified in the call for models or not, Asher certainly seems like he’d be a fantastic and adorable face for OshKosh.

If you want to show Asher some support, you can find him on Facebook here.

What do you think of this situation – and how Asher’s mom reacted? Are you going to follow this story to see what happens?