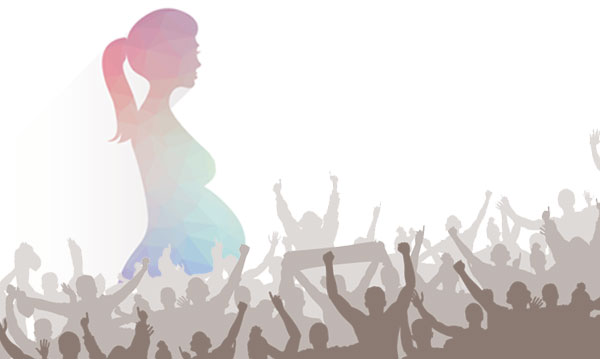 Time to deliver that baby! House party, anybody? Birthing rooms are experiencing an influx of visitors itching to see mom and baby in the act – and they’re not members of the medical staff.

“Crowd birthing” refers to inviting a small drove of family and friends into the birthing room, not before, not after, but during childbirth – some even document the experience on social media.

Channel Mum, a blog dedicated to the U.K. parenting experience, surveyed 2,000 mothers and discovered an average of eight people accompany laboring 20-somethings and teens during childbirth. ABC News Go points out eight loved ones were in the room when Kourtney Kardashian documented the delivery of daughter, Penelope, for the world in 2012 and hints the famous family may be responsible for the uptick in the trend.

Ruth Iorio live-tweeted her birth in 2013, complete with placenta and nude mom with baby pics using the hashtag #ruthshomebirth. Iorio told the Huffington Post her goal was to share “my unique experience, whether attractive or not and just to be honest about it.”

Many hospitals still host a number of regulations prohibiting so many people at mom’s side during this vulnerable performance, but the demand for more spectators in birthing rooms at University Hospitals Case Medical Center in Ohio led the hospital to revoke its regulation of three to unlimited – that is, until nurses “lost control of the room.” The birthing center reverted back to the three-person maximum but turns a “blind eye” as long as toes don’t get stepped on and mom experiences no complications.

While I think women should document their bodies how they please – heck, the public can’t seem to release enough leaked vids, photos and “slut shaming,” why not voluntarily come full circle – I wonder about the motives behind crowd birthing. Personally, I wouldn’t want a gaggle of people in my face or around my nether regions if they weren’t distinctly serving a medical purpose.

Research shows the drawback of such publicized births.

The survey conducted by Channel Mum found that mothers who crowd birth are increasingly more likely to refuse pain relief, simply “because they fear they will be judged” and acknowledge “social pressure as a reason to have a birth without painkillers.” Twenty-five percent of moms said they “felt that opting for a caesarean section would make them feel as though they had ‘failed at giving birth.'” Another 15 percent said they “felt under pressure” from celebrities who took to social media to claim they’d “sailed through labor.”

What do you think? Are crowd-birthing mothers’ motives intimate support, or are we yet again being steamrolled by socially mediated expectations?