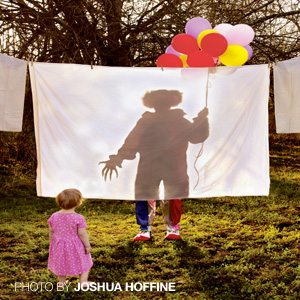 We use the phrase "a parent's worst nightmare" to describe an unthinkable tragedy befalling our kids. In that vein, rest assured: Kansas City photographer Joshua Hoffine's bloodcurdling work features incredibly unlikely scenarios. But man, is it unnerving. And it's probably more accurately described by the term "childhood fears."

Stuff like a giant "snake" seconds from sinking its fangs into a bawling baby (the creature's just burst through the heating vent). And a cherubic, terror-stricken toddler staring at an encroaching zombie horde – as her maniacal dad, rifle in hand, is blasting one's brains out. Or, perhaps most unsettling: a pigtailed little girl laying in bed with her freshly deceased mother, who has a stream of cockroaches crawling from her gaping mouth, streaming down the sheets and onto the floor. On the nightstand is a photo of mother and daughter in happier days.

And you thought your family had skeletons in its closet.

It's absolutely artistic. And, depending on your personal brand of phobia, some of it's hair-raising as hell. There's the creepy clown. The menacing creature under the dank basement stairs. Monster beneath bed. It's all in here – with stunning props, detailed room recreations, pitch-perfect lighting and innocent kids who look genuinely, poop-their-pants scared.

What's shocked some folks is that fact Hoffine has actually used two of his own daughters in some of the images, according to Daily Mail out of the UK. The artist was inspired by reading bedtime stories to his girls (he has four total), it reported – and notes that Hoffine took pains to ensure his tykes weren't truly terrified. Like in the shot of a girl, about 4, in pj's, clutching her teddy bear while perched on her bed as huge, furry white claws reach out from under the bedskirt: "She could only really perform for about a minute. I'd have cookies baking in the background," dad said, according to Daily Mail.

And this self-dubbed maker of "horror photographs" – a phrase Hoffine's website says he coined (he does a lot of work with adults, too) – has been using his offspring as models for a spell now. Back in a 2010 interview with Moviefone, he addressed the topic brightly, saying his girls are quite cool with daddy's macabre material. "They are always very excited to be a part of it," Hoffine told the website. "They are exceedingly proud."

When Hoffine's work hit Huffington Post this past summer, it had commenters abuzz, from admiring "world's best father" accolades to cries of "child abuse."

But one theme seemed to strike an uncomfortable chord in many: A couple photos focused on very little girls, dressed only in white panties, about to be attacked. In one, an alien-looking creature is pushing open the door to the girl's room; we see her reflected in a full-length mirror on the back of the door, hands covering her mouth – looking, depending on your viewpoint, borderline coquettish (she's maybe 5).

In another, a snarling wolf has a vulnerable child, not much younger, cornered on some stairs. Hoffine addressed this directly with Daily Mail: "This one I get hate mail for; it crosses the line for so many people," he said in the article. "The wolf is universally read as a sexual predator." The notion, perhaps above the content of the other photos, may strike a few hairs too close to possibility. It's undoubtedly upsetting to see these small, exposed little people about to meet their fate – even though it's all fake.

Really, maybe it all comes down to exactly what Hoffine is trying to explore: fear. And at least one HuffPo commenter, Counterglow, got a kick out of imagining these kids perhaps kicking some of their own fears.

"I bet (Hoffine's) biggest problem was catching them when they weren't laughing with delight at the prospect of being scary and creepy."