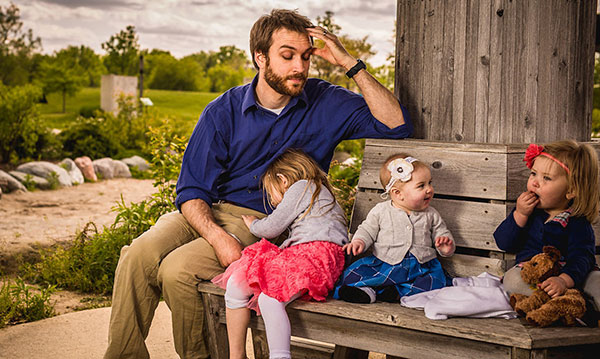 It’s hard not to laugh at the things that come out of kids’ mouths sometimes. The questions and those blunt without-a-filter comments!

Which is why we find James Breakwell’s Twitter so entertaining. This dad to four girls ages 6, 4, 2 and 10 months old often tweets funny conversations he has with his little ones, including their curious questions and comments – and his and his wife’s responses.

Me: We have enough girls. We should try to have a boy.

Wife: They’re kids, not Pokemon. We don’t have to catch ’em all.

4: What happens if the world runs out of Cheetos?

4-year-old: What do birds do all day?

Me: Fly around and eat, I guess.

4-year-old: How do dogs use toilet paper?

Me: How was school?

6-year-old: All we ever learn is math and reading.

Me: What should you learn?

6-year-old: The baby pooped through her clothes. It’s everywhere.

Me: I’ll change her.

And that’s just a sampling of the parenting commentary on his Twitter page.

Breakwell has about 655,000 followers on the social media site, no doubt many who love to read these snippets and follow along with the many adventures of being a parent. And his kids seem to love it, too, he tells New Indian Express. In fact, he told the paper they get jealous if he leaves them out of a tweet.

In April, the Daily Mail posted a story about Breakwell, and Breakwell told the outlet, “My tweets are a mix. Some are real, some are exaggerated, and some are made up. Most are at least inspired by my kids.”

Despite this, his tweets are a good representation of the sometimes funny, sometimes chaotic life of being a parent. It’s definitely refreshing to read a Twitter feed that isn’t casting a light on parenting like it’s perfect all of the time.

“The Dad himself admitted that some of the tweets are real, some are made up, but inspired by his kids. I don’t care, to be honest, most of them are pretty funny and made me, personally, laugh,” says commenter Elle on the Daily Mail article. “Besides, he sounds like a really nice and fun Dad and that’s what matters the most.”

Plus, we agree because dad and his girls are having a good time with it. He told Babble recently, “I’m still not sure if I’m empowering my kids or ruining their lives. I’ll have to wait and see if they end up in medical school or prison. For now, I strongly believe in letting my daughters do whatever they think is fun as long as it won’t get them killed or cost me any money.”

What do you think of this dad’s tweets? Comment below!