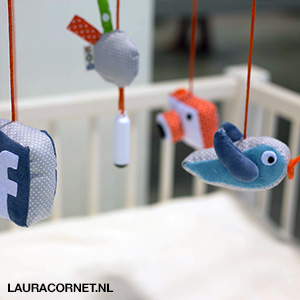 You've heard of tech-savvy teens, but what about tech-savvy tots? A product from Dutch designer Laura Cornet allows babies to take their own selfies and post them to Facebook, Twitter or other social media sites – without help from mom or dad.

It's called New Born Fame, and it's a simple crib mobile with a very high-tech twist.

Each of the plush toys on the mobile is shaped like the logos from Facebook, Twitter and Instagram – and is outfitted with little cameras. Each time baby reaches for the mobile that's spinning above them, the camera snaps a photo and automatically uploads it to the respective site, according to CNN.

Cornet created the product as a graduation project for the department of Man & Communication at Eindhover Design Academy in hopes that she would spark a debate about who can post pictures of infants online.

"It's weird to be involved in the life of someone who doesn't even know I have already seen everything in their life," Cornet tells CNN.

Babies, she says, are visible online within their first day of life. "But the babies didn't agree to having their photos put up online," Cornet says.

Her invention immediately received backlash from parents who thought Cornet was crazy to expose babies this way.

"Seems like a terrible thing to inflict on a child that does not have the cognizance to know what they are doing," one commenter, t3chsupport, writes on CNN article. "Pictures, once on the Internet, are forever."

Some parents, however, believe that they have every right to post their child's pictures online.

"For heaven's sake. Parents put pictures of their kids in albums to share with friends. Social sites just make it easier to share – and it's quite easy to set up a group to share with rather than making them public," The Stir reader, Andreamom001 writes, "No, parents don't need a baby or child's consent to share photos!"

If you're one to plaster your babies newest adventure all over Facebook, you won't find this product in stores or online, because it isn't real, yet. Cornet does, however, have another version in the works that will send the photos to mom and dad's phone, instead of directly online, The Stir reports.