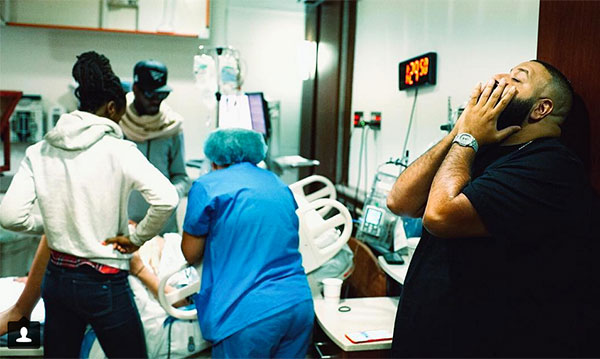 Social media has taken things to another level, especially in the celebrity world. Take record producer DJ Khaled who recently Snapchatted the birth of his first son for the world to see. His long-time partner, Nicole Tuck, gave birth to their son, Asahd Tuck Khaled, born in the early hours of Oct. 23, 2016 – and the famous DJ’s followers went crazy with his open-book approach to the big event.

If you’ve never heard of DJ Khaled, let me get you up to speed. He’s a record producer, DJ and music executive – and he’s apparently got the social media thing on lock – especially when it comes to Snapchat. Back in late 2015, The New York Times even wrote a post about DJ Khalid’s presence on the social media site and how it has taken him to another level of fame.

“His Snapchat is a renewable source of relentless positivity, a kind of choose-your-own adventure motivational talk. It succeeds in the space between laugh-with and laugh-at; he endlessly replays the same scenes and motifs, a Groundhog Day of braggadocio and encouragement. His catchphrases — “Another one,” “Bless up,” “They don’t want you to … ” — have become a lingua franca. He is now the foremost user of the key emoji, and, in his discussions of “major keys of success,” has rescued that emoji from obscurity,” The New York Times writes.

He’s big on positivity, plus he really gives his followers a look his everyday life – whether he’s slathering on lotion, making a Silk Milk smoothie or in the studio guiding an article through his latest track.

So, it’s no surprise he let the world into his partner’s hospital room to commemorate his son’s birth. “The Snapchat story features an anxious Khaled, who complains about his nerves as he asks the doctor how much longer he has to wait. Towards the end, Khaled’s son’s first cries are heard, to which Khaled replies, “God is great, man!” NBC News reports.

Clearly the new dad is in love with his son and excited to be a parent, but I still find the act of Snapchatting and constantly updating people on these sorts of events to be the part of social media that is too much.

I understand that celebrities overshare or they seem to feel the need to do so. Perhaps it helps their brand, but oversharing isn’t always a good thing (case in point, Kim Kardashian’s recent robbery, which some say is a result of too much sharing on social media).

I think maybe there are some moments – like the birth of a child – that celebs and anyone, really, should enjoy in private. You don’t have to document every second of your life. Live in the moment instead.

What do you think of Snapchatting childbirth? Tell us in comments.