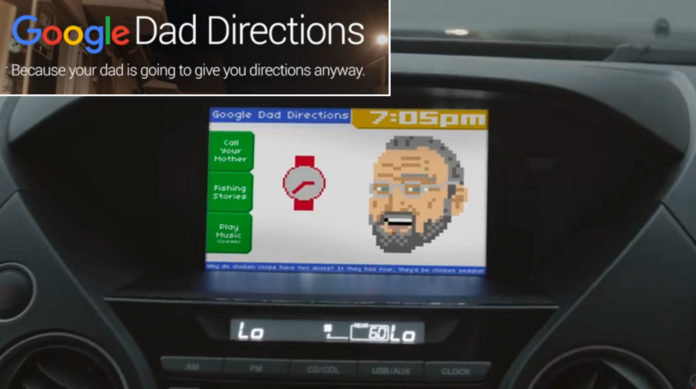 Has your pops ever gotten you lost? Men are stereotypically notorious for not asking for directions and guestimating shortcuts, but with GPS, wrong turns are typically mishaps of the past. Comedy group Above Average meshes the two in a parody video posted to YouTube that puts your father in a navigation system – and the result makes for incompetent navigating.

In the three-minute clip, a couple gets into the car, ready for a night out at a new restaurant, when the pixelated image of the driver’s father materializes on the dash. Dad asks where they’re headed, introducing a new app called Google Dad Directions, a service that lets your old man tell you how to reach your destination, or get you lost.

Watch the video below:

Beside the pixelated image of dad, three touchscreen options take up the left side of the screen and make it a synch to “Call Your Mother,” hear your dad’s “Fishing Stories” or “Play Music” from one of dad’s favorite bands, like The Doobie Brothers.

Comedic relief scrolls at the bottom of the screen in the form of cheesy dad jokes, or even a “racially insensitive comment” to let you know that “a China family lives over there now.”

While the app is imaginary, the technology seems ahead of its time. Save a few elderly huhs when prompted by his son’s verbal commands, virtual dad’s skilled at comprehending questions, then ignoring them. However, the pixelated and blocky images hint other functions of the gadget aren’t up to date – including the built-in printer that issues a napkin with incomprehensible doodles, with an added request to pick up batteries while they’re out, when the girlfriend insists a visual map might prove more effective. And prior to reaching their destination, pops first takes the duo to the end of a cul-de-sac, where there’s nothing but a fence and a fire hydrant, and insists their destination has been reached.

All the while, virtual pops rallies off other not-so-hot spots the two youngsters might like instead. When the driver attempts to shut him down, dad says, “Uh Uh! Buddy, I want to see two hands on that wheel!”

By the time the couple reaches the destination that should’ve taken them 10 minutes, the restaurant is closed. Dad gives a customary “Ah. That’s too bad,” before rallying off more not-so-destination-worthy ideas.

While I can relate to my dad rather getting us lost than asking for directions before GPS-driven cars became the norm, I think he could appreciate this video, since to this day, he still spats gibes at his GPS he’s regularly convinced works to get us lost and take last minute, knee-jerking turns. I think we can all appreciate our navigation apps run on satellite signals and not our proud pops’ intuition.

What do you think? How would you react to a GPS fully equipped with an image of your dad’s face and his corny jokes?