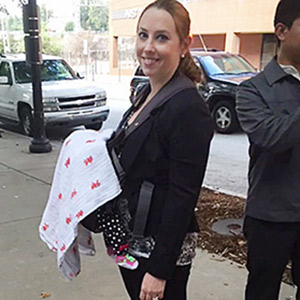 Being a mom to a newborn is hard enough without throwing cranky lawmakers into the mix. One Atlanta judge faces a formal complaint, along with public scrutiny, after he made the not-so-family-friendly decision to refuse a lawyer's delay request for maternity leave, then shame her in front of a full court room for bringing her infant to work.

On Sept. 8, shortly after taking on two young brothers as clients, immigration lawyer Stacy Ehrisman-Mickle filed a request to postpone their next hearing, which was supposed to take place on Oct. 7, because it fell during her maternity leave. The court received her request on Sept. 9.

Since two other judges, one male and one female, had granted similar requests based on notes from her doctor, Ehrisman-Mickle thought it wouldn't be a problem. She was shocked, however, when she received a response from Immigration Judge J. Dan Pelletier, on Oct. 2, denying her request due to "no good cause."

She had just four days to find someone to watch her 4-week-old daughter, who was too young for day care. To make matters worse, her husband – who is a truck driver – was out of town and she has no family in the area to care for her child.

"I was in a state of panic. I didn't know what to do with my baby," she told The Associated Press.

Out of options and out of time, Ehrisman-Mickle called her pediatrician to ask if it would be safe to bring her daughter to court. The doctor OK'd it as long as the infant was in a carrier, facing her body, and no one touched her.

With the doctor's blessing, and the baby carried as prescribed, Ehrisman-Mickle headed to work. During the hearing, however, her baby began to cry.

"As soon as she started crying, he got very angry and said, 'Council, don't you think that this is inappropriate?'" Ehrisman-Mickle told the Huffington Post in a live interview.

She explained to the judge that she agreed and that this is why she requested the delay. He then questioned her parenting skills in front of a full courtroom saying that her pediatrician must be appalled she would expose her baby to the germs in the court.

"I was embarrassed. I felt humiliated," Ehrisman-Mickle said.

Another lawyer, who was present in the courtroom, confirmed the details of the story. When the Huffington Post called Pelletier for comment, he said that immigration judges cannot make public comments. Eventually, he agreed to delay the hearing until after Ehrisman-Mickle is cleared by her doctor to return to work.

This action didn't come soon enough for Ehrisman-Mickle, who filed a formal complaint against Pelletier the same day as the hearing, and hasn't earned him any brownie points with the general public either.

"An attorney ought to be able to request a delay for a reasonable issue and have it granted," Huffington Post reader Melanie Ainsworth Nelson wrote in response to another comment. "Lawyers do this every day for reasons a lot less important than being on maternity leave."

However, other claim that she was irresponsible, had nine months to prepare for child care and should have not taken on these clients if she was on leave.

Call us old-fashioned, but it seems like six weeks of maternity leave is not too much to ask for after bringing a life into the world – but that's just us. For the judge to treat this working mother that was is incredibly inappropriate.

What do you think of this?