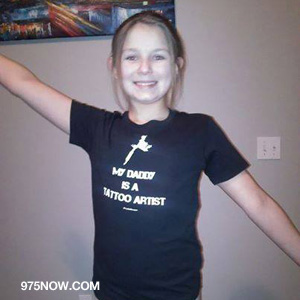 There are some T-shirts that kids should just not wear. You know the ones – usually a graphic tee with a sassy saying or a vulgar joke.

Locally, there's been a bit of uproar due to one little girl's T-shirt and what allegedly happened at her school. But, the T-shirt didn't have a gross joke on it. According to Lansing radio station 97.5 FM, a Clinton Township student was told to cover her T-shirt that read, "My Daddy is a Tattoo Artist."

After the debacle, the girl's dad was on Detroit radio station Channel 9.55 FM on the Mojo In The Morning show on Feb. 28 to talk about what happened with his 10-year-old daughter. The dad, whose name is Shaun Kelly, according to the show's Facebook page, told Mojo's team on air that his daughter reported, "I wore my new shirt to school and the teacher told me it could be inappropriate and I should cover it with my hoody jacket."

Kelly, who admitted his daughter was upset, told Mojo he "didn't see a problem with it" and posted a photo of his daughter wearing the shirt to get some opinions on the shirt.

Folks who heard about this story through the radio station were on the Internet voicing their opinions, some saying how it was "sad" and "insane."

On the Mojo in the Morning post, Melissa Watkins-Craddock commented, "The teachers should be embracing the benefit the girl has. Her dad is an 'artist.' Too many schools have lost their art programs, so we ALL NEED to embrace those individuals that help keep imagination, creativity and inspiration alive … After all, doesn't that creativity inspire innovation, some of which the teachers reap the benefits of?"

Commenter Derek Wasson suggests, "If this school has an issue with this T-shirt, they then need to institute uniforms. Uniforms will level the playing field for everyone and there will be no issue with having to have fashion police."

Kelly went on to tell the radio hosts he did go to the school to talk to the teacher who made the comment, as well as the principal, and the teacher told him there was a miscommunication and emphasized that she said the shirt "could" be seen inappropriate to some and suggested she zip up.

Turns out, things are A-OK now. Dad did post an update on his business Facebook page to clear the air after his debut on Mojo In The Morning, which can be read below.

It's clear dad was upset both because of his daughter's feelings being hurt for having pride in her dad's work – plus at the question of acceptance of tattoos. Thankfully, this situation has a happy ending.

What would you have done in this situation? Was speaking out on the Internet and on the radio a good way to bring attention to the issue, or was it too much?