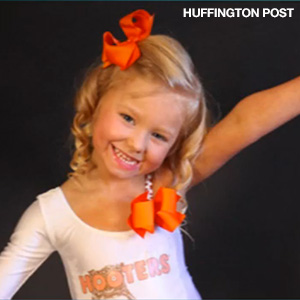 All parents think that their children are beautiful, but a rising trend of childhood pageants are proving that some parents will go to any lengths to prove it. One mother, Leann, 33, of London, may have pushed the boundaries of childhood beauty too far, however, when she dressed her child as a Hooters waitress and allowed her to dance suggestively on stage, the Huffington Post reports.

The clip of the 4-year-old girl's routine aired on a UK Channel 5 documentary called Blinging Up Baby that gives viewers a peek at childhood pageants and the trend of accessorizing children when they aren't competing.

The costume, which was modified to have one full sleeve and one spaghetti strap on the top, was a way for Leann's daughter, Scarlett, to stand out in the fierce competition of the pageant, her mother says.

She certainly stood out, but probably not in the way Leann had expected. Since the airing of the documentary, parents around the world are screaming out in protest of not only the girl's costume, but of the legitimacy of pageants themselves – questioning whether or not pageants are glorifying the sexualization of children.

Children who prepare for these pageants undergo teeth whitening treatments, spray-on tans, and hours in hair and makeup.

"This is absolutely disgraceful," Rebecca Sommers Hebert, a Huffington Post reader, comments. "Childhood is short enough in today's world. It's seriously damaging to kids to try and make them grow up any faster than they have to."

Leann, however, stands by her decision.

Meanwhile, the show, Blinging Up Baby, has caused some controversy of its own. Benji Wilson, a writer for London newspaper The Telegraph describes the show as snobbish and asserts that there are actually only 20 or so people in the UK participating in the new "fad."

"The purpose of the documentary, I think, was to encourage the sort of low-level sneering that underpins so much factual entertainment on television these days," he writes. "We all remember what good sport it was laughing at gypsies because they happened to do things slightly differently to the bien-pensant-opinion formers who make most television. Well, Blinging Up Baby, was more of the same."

Regardless if dressing up our children in suggestive clothing and spray-on tans is the next new fad or not, one thing is for certain: Parents are not messing around when it comes to parading them around stage in a sexual manner.

"Sexualizing children is seriously wrong and borderline abusive. Parents are being completely inappropriate and setting their kids up for personality issues when they get older. A 4-year-old grinding like a stripper? You just cannot shrug that off," reader of The Telegraph, Darren writes.