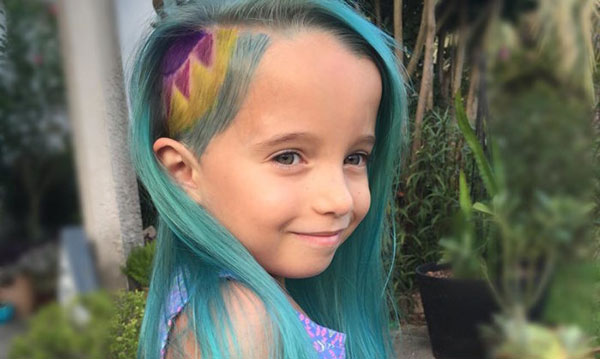 Opinions are like dirty diapers. They stink, and at some point everyone has to deal with them. When it comes to parenting, everyone seems to know the “right” way to get the job done. For Mary Thomaston, of Florida, the right way of raising her daughter, Lyra, was to let the 6-year-old express herself through her appearance.

According to her mom’s social media posts, Lyra had been asking to have her hair dyed for quite some time before her mom, a hair stylist, finally gave in. When Thomaston was finished, Lyra’s long locks were blue, one side of her head was shaved and colored in a purple, pink, yellow and blue pattern – dubbed unicorn hair. Lyra was ecstatic, and Thomaston posted a photo of her daughter’s new ‘do to Instagram with, among others, a hashtag for Manic Panic, a type of all-natural vegan dye that fades over time, which she later clarified as the dye that she used.

Almost immediately, backlash started against the mom’s decision, calling her out for making Lyra sit so long for her hair, treating her like a doll and potentially exposing her to harmful chemicals.

Thomaston defended her actions, telling her “haters” that the dye will wash out, that Lyra wasn’t harmed, and that, “it’s hair … it’ll grow back.”

When the comments didn’t stop, she wrote a longer post telling them that she has “this weird goal of raising self-confident, self-assured children who know and feel the freedom of self-expression. So when my child asks for blue hair, I tell her how much I like her choice and how beautiful she is. Even better, I do it with quality products that not only respects the integrity of her hair, but also fades out with time […]”

She also went on to say that if someone doesn’t like the blue, that they can say so, but disrespectful comments about Lyra or those that call her parenting skills into question were not welcome.

Of course, calling a child or anyone outside of their name is incredibly inappropriate and immature. It should never be tolerated, so kudos to this mom for putting those people into their place.

As for the hair, it’s pretty rad, but I can totally understand where folks are coming from. Hair dye can completely destroy your hair, especially if used incorrectly. In this case, however, I call no harm no foul. I’ve used Manic Panic products in the past, and the experience is 100-percent different from permanent, chemical dyes – right down to the smell it leaves behind.

According to Manic Panic’s website, their hair color has no (zero, zip, nada) harmful chemicals, but uses natural vegan dyes that mostly sit on top of the hair, unlike permanent dyes, which in some cases contain ammonia and penetrate the hair shaft.

True, you may have to lighten your hair color to get the vibrancy with Manic Panic, but you don’t have to. Considering Lyra’s hair was super light to begin with and mom never mentioned lightening her hair, we’re going to assume she didn’t, meaning that the dye will wash out of her hair in time.

This little one is expressing herself, and mom is licensed to know exactly what she was doing, probably more so than the most of the folks expressing their dislike for the hair.

I say let this little unicorn be free to rock whatever look she likes.

What do you think of this unicorn hair? Tell us in the comments below.