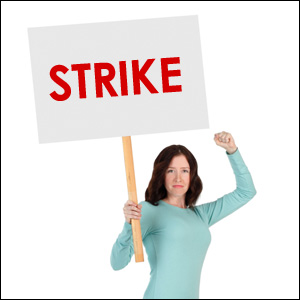 Sick of always being the one to do the dishes, fold the laundry – and all the while wishing those little rug rats would pitch in? You're not alone.

At least in my home, it was commonplace to hear my mother say, "If you and your sister don't pitch in around here, I'm just going to stop cleaning up behind you."

Well, that's just what Jessica Stilwell from Calgary, Alberta decided to do. Without warning, Stilwell went on a "mommy strike," as she calls it in her blog "Crazy Working Mom: Diary of a mother on the brink of snapping."

The mom of three daughters – 12-year-old twins and a 10-year-old – threw in the towel on Oct. 1, announcing in her blog, "This working mom has officially gone on STRIKE within the home!!! Nothing said, no warning … updates to follow."

From Day One, Stilwell recorded the results of the strike on her blog – from her kids' comments to photos of the pigsty that materialized in her kitchen sink.

On the first day, Stilwell noted that while her daughters and husband, Dylan (who she tipped off about the strike), left dishes in the sink and backpacks in the middle of the hallway, "I sit back, with a glass of wine and smile … all in silence."

As Stilwell continued to wash her own individual plates, relax and take time to herself, her children began to notice the house was in disarray.

"'I don't want paper plates or beer cups for breakfast. Can you please help me clean up?'" she writes one daughter complained on Day Four. "'You STILL haven't cleaned the kitchen – this is disgusting!!'" another whined.

The crusty, smelly dishes, dusty shelves and cluttered living room became too much for the kids by Day Six, Stilwell wrote on her blog.

"I hate to disappoint you all … but late last night, all three children caved. The Strike is over," Stilwell reported. "They actually began turning on each other. It got ugly. Each one blamed the others for the mess and they began yelling at one another to pick up after themselves."

When Stilwell spilled the beans to her kids about her strike, one proclaimed, "'Dumbest thing ever!! Kids have parents for a reason: to clean up after them.'"

In the end, all three of the girls apologized, mom noted – and even thanked her for cleaning up behind them.

But the main point? Stilwell wanted her kids to take something away from her "mommy strike."

Stilwell wrote that she is proud of her kids and thinks they're great. But she made note that, "They are also very privileged in many ways."

"I want to give them the world. But as I rush around every day working with other parents and other families, I realized I was doing my own children a disservice," she wrote. "I was setting them up for failure. I fear we are raising a generation of young people whose attitudes will be, 'What are you going to do for me?'"

Well done, Jessica Stilwell. Now excuse me while I shower my mom with thanks and praise for doing all that she has done – and for never going through with that much-threatened mom strike.