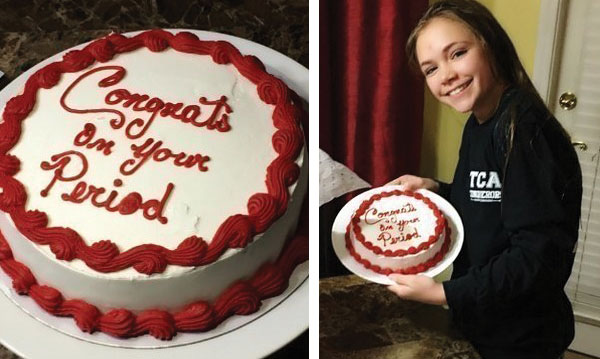 Brooke Lee is a 12-year-old from Jacksonville, Florida who started her period. Pretty normal, right? But after her cousin Autumn Jenkins tweeted about the “period party” her mom, Shelly, orchestrated, over 15,000 Twitter users joined in the conversation.

In celebration, loved ones gifted Brooke pads and tampons, and even ate some pizza. Autumn told Buzzfeed the fanfare wasn’t surprising coming from her aunt, because in their family, Shelly’s called the “memory maker.”

Per Shelly’s specifications, on the table was a chocolate cake covered in vanilla buttercream and inscribed with the words, “Congrats on your period,” in red icing – mom’s special prescription: a super pack of serotonin to help with her period.

Personally I saw this oddly fitting – as all of the other growth-celebrating holidays (i.e. birthdays and fitness cheat days) come with cake anyhow.

Needless to say, Twitter couldn’t help but take a bite – from discussions about the apt redness of the cake’s icing to musings about being the baker who received that special order.

However, a dialogue ultimately erupted in support of the period party (which actually isn’t anything new if you recall our old Oh Mother post on the same topic). Some Twitter users appreciated that Shelly recognized her daughter hit a big milestone and demonstrated support in a positive way– without making menstruation seem scary or weird.

Some Twitter users especially appreciated Shelly’s efforts because it served as a public antithesis to period shaming. A conversation brought to the forefront of social media by the likes of artist Rupi Kaur, who engaged in a battle with Instagram after her photo series meant to normalize periods was deleted because they “violated Community Guidelines,” according to the Washington Post.

Kaur pushed back with criticism that what’s happening in the photos, stains on clothes and on the bathroom floor, are natural and should not be censored. Instagram eventually responded with an apology and restoration of her content, but it just goes to show that with all social progress and change comes the pushback of apprehension and stagnation.

Clue, a woman’s health application partnered with the International Women’s Health Coalition advocacy group to learn more about how periods are talked about worldwide.

After polling 90,000 people in over 190 countries, they found that many women around the world faced similar problems when it came to their periods. Across the globe women have heard their periods referred to only by slang terms or euphemisms, struggled with being uncomfortable talking to classmates or colleagues (of both genders) about their periods and missed school, work or opportunities because they were afraid of others finding out about their periods.

However, seeing the response to Brooke’s period party certainly offers another option for women looking to educate and support one another.

Instead of fearing the feeling of your flushing cheeks that match the sticky red mess that’s ruined your pants on a day you’ve been caught off guard, Shelly’s gesture turns the notion of periods as a painful monster into something else.

It says so right on the cake and on the faces of the people at Brooke’s period party: “Congratulations.” What’s happening is normal – and we’re all here the help.

Did I mention there was cake? Let’s eat it.

What do you think of period parties? Tell us in comments.