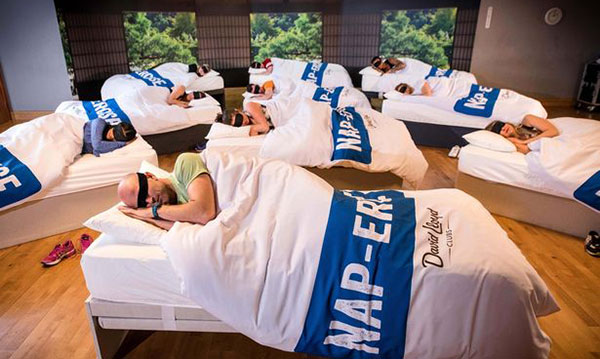 Yawn. It’s 2:30 p.m. on a Wednesday. You’re feeling sluggish after helping the kids with homework and then doing laundry until midnight. How many hours did you actually get to sleep last night?

The David Lloyd Club in Sidcup – a suburb of London, England – might have just the solution to the problem of sleepless nights for moms and dads.

The gym just held a free trial run for Napercise, a 60-minute class where adults caught some shut eye, all in the comfort of a bed compete with blanket, eye mask and “mood music,” Forbes reports.

Rather than snub the concept, more than 100 exhausted British parents reportedly signed up for the inaugural run the weekend of April 29-30, the Huffington Post notes.

Aimed at helping exhausted parents get some restorative R&R, Napercise involves a few minutes of stretching and stress relief followed by 45 minutes of uninterrupted sleep in a temperature-optimized room, rounded out by some additional stretching

Maybe they’re onto something. After all, most grown-ups don’t get enough sleep. The Centers for Disease Control and Prevention reports that roughly a third of all adults fall below the benchmark of the minimum suggested seven hours of sleep per night.

The National Sleep Foundation suggests a simple 20-minute nap to boost motor functions and energy.
But will people really pay to hit the hay at a gym with a bunch of strangers?

If the trials go well, it sounds like the David Lloyd Club is seriously considering full implementation of the Napercise concept. The cost will be included in its monthly membership fees, according to Forbes. While we couldn’t pinpoint those rates directly on the club’s website, a monthly membership there is about $91-$180, according to Price Guide Lady, a website that reports on local organization prices in the UK.

If people are already paying to go to the gym and work out, maybe throwing in a napping class wouldn’t be such a bad idea?

While I prefer the comfort of my own bed and complete darkness when I sleep, Napercise might be helpful for some parents who just can’t catch enough Z’s at home.

Would you consider joining a gym if it offered napping classes along with the regular gym regime? Do you think it would help you? Tell us in the comments.