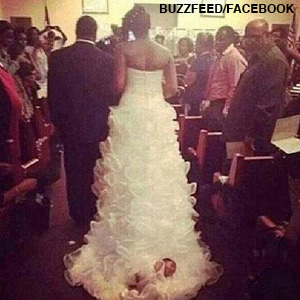 It's common to see flower girls with baskets and ring bearers with pillows, but perhaps never has it been known to "attach" a newborn baby to the train of a bride's wedding gown. Until now, anyway.

According to MyFox Phoneix, when the photo of the bride and baby hit the web, many were outraged and some felt Carter-Brooks should be reported to Child Protective Services for putting her 1-month old daughter in the train of her gown.

Over at Fox 8, based in North Carolina, one commenter sounded off, "Nothing says 'happily ever after' like dragging your newborn on the floor behind you," while another simply stated, "I know child abuse when I see it, and that's child endangerment."

The criticism has been swift. But what are those closer to the source saying? It doesn't appear the couple has directly addressed the press, but relatives and their wedding planner have spoken out.

"The baby was not dragged," Jeffrey Preston, the bride's cousin, told WREG-TV in Memphis, Tennessee. "The baby was laid on the train for a photo shot of them coming into the church." Marcy Wright, the bride's sister, backed this up in the article, adding that the baby girl was picked up before mom proceeded down the aisle.

However, Wright told WREG-TV, the move did come as a surprise: "She (Carter-Brooks) didn't plan it. If she did, she didn't tell anyone about it."

Meanwhile, in a somewhat conflicting report, the Brooks' wedding planner, Kaye Jordon, reportedly told WBBJ 7 Eyewitness News – based in West Tennessee – that the bride "walked very slowly down the aisle and blocked off the pews so the infant would not be harmed." Jordan also spoke with the local Jackson Sun newspaper, saying, "It wasn't something new. It was something that has been done for generations." (Incidentally, the local David's Bridal, where the Vera Wang gown was reportedly purchased, doesn't look like it responded to the Sun's interview request.)

As for Carter-Brooks has herself? Mom fired back on Facebook (her account now appears to have been deleted) – and defended her decision.

"Our 1 month old was awake and well secured on my train," she wrote. "Media I see how it works – regardless the situation or purpose people (are going to) have something negative to say!" She also wrote, "we had our hearts in Christ which covers all."

And, despite those sharing concerns that the image was "just wrong" or even borderline violent, others have spoken up to defend the new mom.

"Safety issues were taken into consideration. She isn't being dragged on the floor in unsanitary conditions. She's riding on her mother's brand new, CLEAN wedding dress train," said a Fox 8 commenter. "How many of you have put a blanket on your carpet out in your living room to change your baby's diaper?"

Daily Mail also shares that after the big day, Pamela Stone, apparently a friend of the newlyweds, left a Facebook message for the bride that read, "your wedding was super perfect … and the baby princess tagging behind you, it brought tears to my eyes."