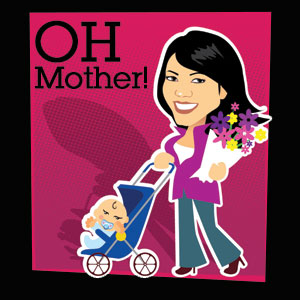 The year 2012 has been a pretty good one for bad parenting. From a mom who tattooed her young child to a dad who stuck his kid in a washing machine and was caught on tape, parents have been pretty dumb since last January. So now, it's time to look back and have a laugh (or maybe just shake your head in disappointment) at the top 10 crazy parenting moments from the Metro Parent Oh Mother blog.

Our No. 10 spot isn't stupid or silly, but it is a bit shocking in a bittersweet way. In January, mom Diane Aulger of Texas found out her husband Mark had only a few days left to live. She induced labor two weeks early so dad and daughter Savannah could meet.

In April, we wrote about these childish helicopter parents who wrecked a neighborhood Easter egg hunt for their kids in 2011. With not enough eggs for every kid, parents got pushy and scooped up the booty. Thanks to these moms and dads, there was no egg hunt in 2012.

8. Mom Demands Oak Trees be Cut Down for Kids with Nut Allergies

Most parents with nut-allergic kids might be a little leery of what their child is exposed to at school. But in November, Canadian mom Donna Giustizia took matters really far, asking for the oak trees near her child's school to be cut down because of the acorns falling on school ground.

Babies usually don't have hair. That's normal. But in June, we introduced you to Baby Bangs – wigs for bald babies. Totally unnecessary, yet the company sells these wigs in six hair colors with styles and hair bands. Now parents – err, we mean, babies – can feel more secure about that premature baldness.

Who ranks No. 6 on our list, you ask? It's the dad from New Jersey who stuck his kid inside of a Laundromat washing machine! But that's not the full extent of it. The machine locked and started running with the boy inside. An employee got him out safely, but the dim dad was caught on tape. Oops.

'Twas the year for parents to up and forget their little ones at the local Chuck E. Cheese's. Three-year-old Harmony from Maryland was left for about three hours and was claimed by her parents – after they saw her pic on TV. Then, in Texas, 5-year-old birthday girl Azana was left for nine hours. Mom noticed the next morning. Seriously?

It was the memorable May cover of TIME magazine: Twenty-six-year-old Jamie Lynn Grumet breastfeeding her 3-year-old son. It turned heads – and sparked a national discussion about breastfeeding and attachment parenting. Whether you agreed with the cover choice or you thought it was out of line, it definitely got us buzzing.

Mom said her tween kid asked to have a small heart tattooed on her arm. So she did it for her. The North Carolina mama used her own equipment to numb and ink her child's arm – and was arrested for it in September. Her excuse? She said she didn't know it was illegal.

A Detroit mom took her child to Old Navy in Troy one May day. A nice little mother-daughter shopping trip, you suppose? Not quite: Mom made her 11-year-old smuggle goods from the store. Then, the mother fled her little convict and, when called by police to pick up the tween from jail, refused. Wow.

Drumroll, please! The No. 1 crazy Oh Mother moment from 2012 is, hands-down, the North Carolina dad who popped nine bullets in his 15-year-old daughter's laptop with a .45. Dad made a YouTube vid of it all as punishment for his daughter's lippy post about her parents on Facebook. The clip went viral in a matter of days.