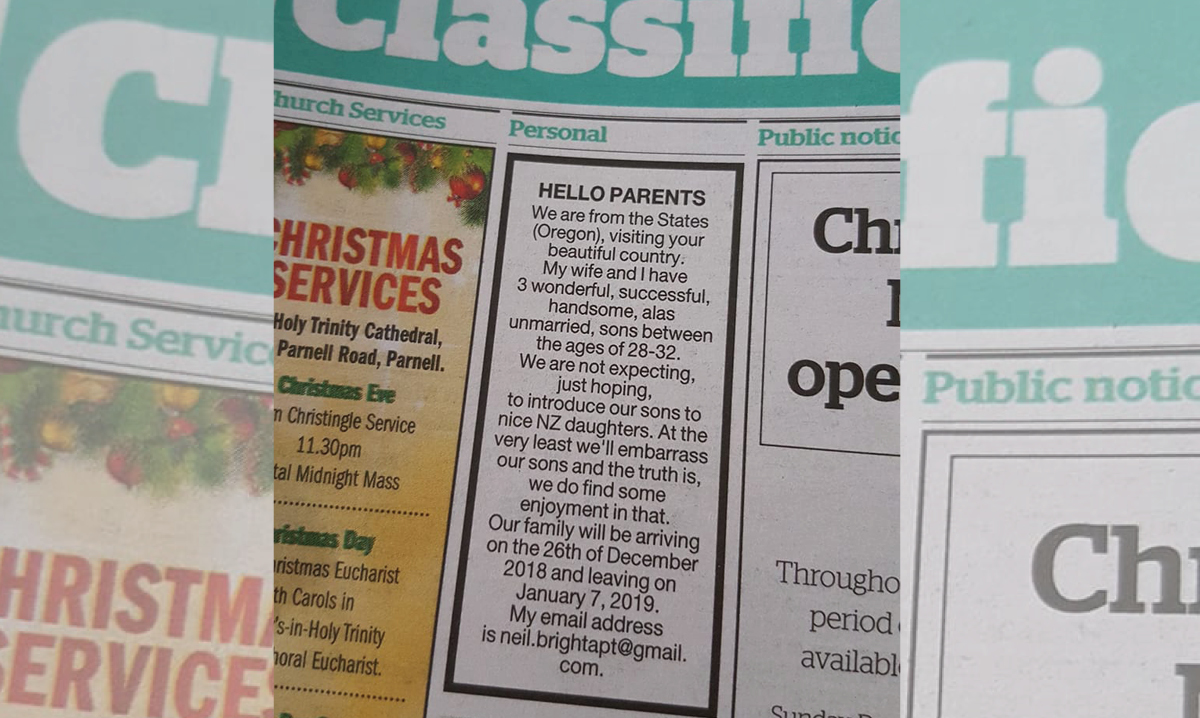 New Zealand: Lock up your daughters.

Three of America’s most eligible bachelors are currently touring in the Land of the Long White Cloud. And they’re single and looking to mingle. Or at least that’s the implication of a classified ad placed in the New Zealand Herald – by the guys’ dad.

Unbeknownst to the brothers, their father, who’s being identified only as Neil, took out a special want ad in advance of a family vacation. It topped the “Personal” column in the Herald’s classified section about a week before the family was set to arrive in the country on Dec. 26.

“HELLO PARENTS” it begins in bold block letters – and Neil is off and running.

He explains that his Oregonian family will soon be in town. “My wife and I have 3 wonderful, successful, handsome, alas unmarried sons between the ages of 28-32,” dad writes. “We are not expecting, just hoping, to introduce our sons to nice NZ daughters.”

To his credit, Neil sprinkles on some wink-nudge charm. “At the very least we’ll embarrass our sons,” he admits, “and the truth is, we do find some enjoyment in that.” It clinches with an email address for interested parties.

By and large, it seems like the Kiwi ladies were in on the fun, quickly posting the ad on social media and tagging friends with quips ranging from “Go get em gals” to “A date for your wedding invite,” the Herald reports.

As for me, I smirked, rolled my eyes – and then couldn’t help but hope this was one of those prank-loving families who rolls with this sort of thing.

Luckily, it sounds like that’s the case. Or at least dad felt pretty confident about it.

“I am sure they will be surprised and annoyed, but I am sure they will laugh,” he told the Herald in a subsequent interview with the paper, owning that he’d never pulled a stunt like this before. “We have a good relationship and are always joking with each other.”

Do the brothers live up to the hype? A pic posted by the Herald depicts three clean-cut guys in North Face jackets with broad 100-watt smiles.

And, as Neil tells it, they’re no schlubs. There’s Benjamin, 26, a Seattle consultant; Jeremy, 28, who works in nonprofits; and Matthew, 31, a Portland real estate pro.

While dad’s apparently been happily providing additional details to select candidates – as of Dec. 20, a day after placing the ad, he’d reportedly received 200-plus responses – it turns out he might also have other, more platonic motives, too.

“We like to travel, and I have gone with my kids to Europe, Australia and Japan, but we have never really interacted with anybody,” he explained to the Herald. “In my mind, I was just interested in them getting to know people, meeting people their age and maybe develop some lasting, permanent relationships.”

And, y’know, possibly tie a knot or two in the process.

Honestly, I’m more curious if Neil was able to keep the ad under wraps before the family touched down in New Zealand, considering the viral steam it’s gathered.

What do you think of this dad’s dating ad for his grown sons? Harmless fun or ridiculous stunt? Let us know your thoughts in the comments.