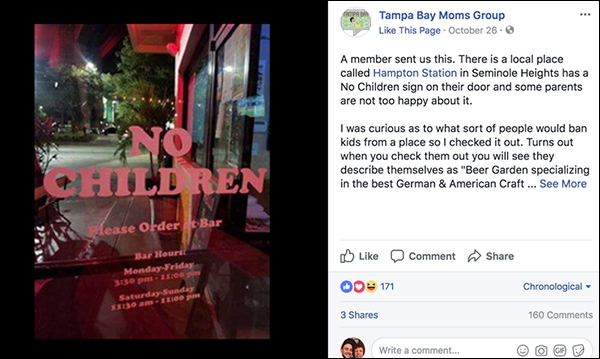 There are some places that kids really shouldn’t be. Strip clubs or dive bars, for example, are probably not the best places to tote junior to. A pizza joint, on the other hand, shouldn’t have an issue with pint-sized patrons – but one Tampa area restaurant, the Hampton Station, is definitely not doing the kid thing … at least not anymore.

This craft beer and pizza shop boasted a family-friendly atmosphere and allowed kids to dine for several years, until Oct. 24, when they decided that the shop would no longer serve children.

The owner of the spot claims that they made this decision because the shop is so close to a major roadway and parents often didn’t keep their kids under control.

He wouldn’t elaborate on a recent incident that put a child in danger, but did say that this is “a liability and safety issue” and that after “the incident” he wouldn’t let it happen again.

Since posting the sign, the restaurant has received all kinds of negative reviews, some are just upset about the wording of the sign, which read blatantly read “NO CHILDREN” in all caps and with no explanation, while others are just upset about the policy altogether, pointing out that the owner was happy to take money from families before and it’s bogus that they won’t do it now.

Still, others are happy with the policy, and explain that they don’t want to “trip or hear” other people’s kids while having a beer.

It’s easy to see why some parents are upset. A pizza night should be a fun night that families can share together but I also get the owner’s concerns, too.

Before landing my job at Metro Parent, I was a server at a family-centric restaurant and I have horror stories about parents letting their kids run amok, including multiple times in which kids would grab onto my tray when it was loaded with steaming hot food, while I had heavy plates down my arm and in my other hand, and mom and dad did nothing … or worse, laughed about it.

I get that kids, especially younger kids, don’t understand that they’ll get hurt if a plate of hot food comes down on their head, and that there’s nothing a server can do it if it falls because they are doing their job and their hands are full, but it’s something that mom and dad should be aware of – but not all mom and dads are.

I can only imagine what went through the owners mind if a family was hanging on his patio, eating and drinking, and a kid ran out into traffic. That’s horrifying. And I can definitely see how it would turn him off to allowing families is his restaurant.

While I truly think this is a case of one or two irresponsible people ruining it for the masses, the owner could have handled this a better way. He could have created a policy where families are only allowed to dine inside, or something like that instead of outright banning them. But it’s his restaurant and his choice.

Parenting is hard, and it can be tough to keep an eye on your kids at all times, but that’s your job and if this guy is worried that kids could get hurt on his property, and parent’s aren’t taking the reins, it’s kind of his responsibility to step in and deliver that tough love.

What do you think of this ban and do you think that parents played a part in it? Let us know in the comments.