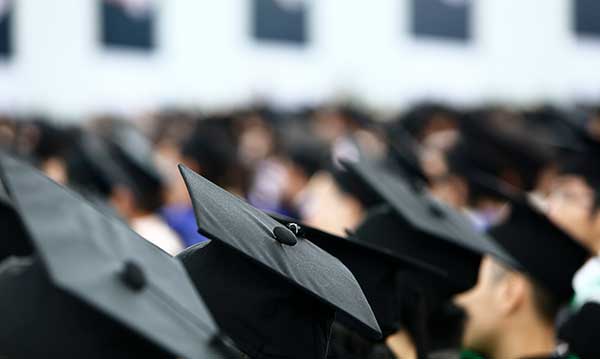 The high school principal who shocked her school community and the world over the weekend with a racial remark she made during a graduation ceremony has issued an apology that blames the devil for her mistake.

Nancy Gordeuk, principal and founder of TNT Academy in Georgia, was chastising the audience for leaving during a speech and then remarked, “Look who’s leaving … all the black people,” Yahoo News reports. Students and families immediately erupted in outrage and video of the remark quickly went viral.

The parents were leaving early because of Gordeuk’s own mistake. She apparently dismissed students too soon because she had forgotten about a final speech that was planned. During that speech she also asked someone to stop taking video and that person had to be removed by security, which led to booing, 11Alive in Atlanta reported. That’s when Gordeuk started scolding the audience and then made the remark.

Here’s part of Gordeuk’s apology letter, issued to parents via email and published by 11Alive.

“A terrible mistake on my part was part of the graduation ceremony on Friday night. The devil was in the house and came out from my mouth. I deeply apologize for my racist comment and hope that forgiveness [is] in your hearts. We all make mistakes and anyone who knows me realizes that I try my hardest to work with the students for them to obtain their goal of a high school diploma.”

She goes on to apologize for her “emotional, un-called [for] generalization of the black persons in attendance.”

Gordeuk seems to understand she was wrong, though her blaming of the devil is questionable to say the least (would she accept that excuse from a student sent to her office?).

What’s missing now, though, is her acceptance of a consequence. We can only expect that the school’s enrollment will suffer as word spreads of the remark, but combating institutionalized racism requires action and parents at the school (and its board, if it has one) should demand Gordeuk’s resignation.

According to 11Alive, the Georgia Accreditation Commission said a teacher, parent or student must file a complaint in order for an investigation to begin. It’s unclear whether a complaint has been filed yet or what could come of it, but in the meantime these students deserve a better equipped leader and Gordeuk should focus on her personal redemption on her own time.

As the incident continues to be shared on social media and news sites everywhere, people have been quick to offer their take on the topic. The Yahoo article had more than 7,600 comments as of Tuesday night.

“Oh don’t give me this ‘devil was in the house’ cop out!” user Banyon wrote on Yahoo. “Absolutely ridiculous excuse for clear-cut racism.”

Wrote another user, Patrick: “Life’s tough, we all do stupid or unthinking things and sometimes we pay the price. Often times it’s innocent, but sometimes it is not. One part of me says chastise this women for saying this, another side says forgive her.”

“I’ve been to many graduations, and people leave for a variety of reasons … job obligations, health reasons, and yes, even an accidental end of ceremonies,” commenter Holly wrote on Yahoo. “Screaming at people to come and sit back down? Calling a guest names and challenging them to a confrontation? How she handled the situation was very rude and unprofessional from the start. The comment at the end is just another log on a fire she had already started. The entire situation makes one wonder what kind of role model she is supposed to be for children….”

What do you think of the situation? Should the principal resign? What would you do if your child attended that school? Comment below.