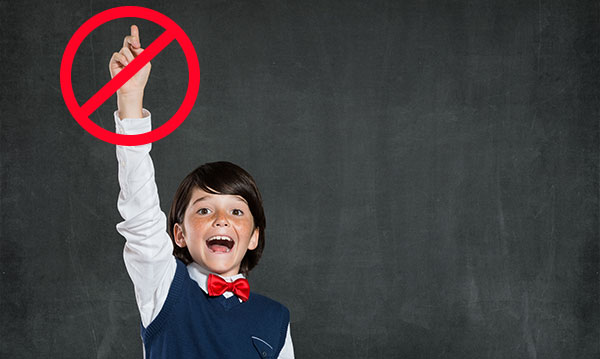 For shy kids in class, the thought of being called on instead of raising your hand to participate is the most anxiety-inducing thing ever. Heck, even for an extrovert like me, being called on in class was stressful when I was a child. It’s much easier to simply take in information and then raise your hand when you feel comfortable – but that no longer matters at a school in England.

In fact, The Samworth Church Academy in England has banned students from raising their hands in class, Pop Sugar reports.

Principal Barry Found wrote a letter to parents disclosing his reasons for banning the common classroom practice. He writes, “We find that the same hands are going up and as such the teaching does not challenge and support the learning of all.” He goes on to say that other techniques will be used to ensure each student is challenged – and everyone has the opportunity to contribute and participate in class.

Again, this is a shy student’s nightmare – or a stressor for a kid who might not know the answer when called on randomly in class. Some parents at the school agree, Pop Sugar notes. Moms are sharing their children’s fears about being called on in class and how kids won’t get the chance to simply raise their hands when they do know the answer to a question.

Furthermore, the National Union of Teachers finds the entire thing shows a “lack of respect” to teachers within the school.

For now, hands will only be raised to signal quiet time.

Honestly, I feel bad for both the teacher and the student in this scenario. Raising hands in class keeps things in order instead of having kids shout things out randomly. And for the kids who aren’t so sure of themselves or an answer to a question, they can choose when they want to raise their hands to speak instead of being called on.

I understand this principal wants to encourage more participation for students who might not always be quick to answer questions, but then he’s also suppressing students who are enthusiastic about the material. Plus, why can’t this decision just be a personal one for each teacher?

What do you think of this ban? Tell us in comments.