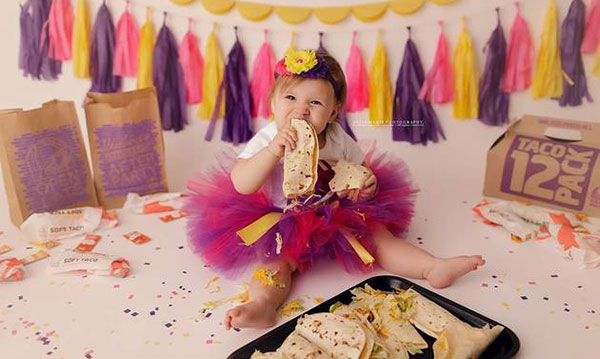 Missouri-mom Monica Phillips decided to forgo the trend of the “smash cake” (where a cake is given to a baby on his or her first birthday – or for a first birthday photo – to make a mess of) and replaced it with a Taco Bell-themed photo opportunity.

In place of the cake, there were a dozen soft shell tacos – and baby Delta appeared to love them.

Phillips told Parents.com that Taco Bell has a special place in her heart, and that’s why she decided to run with the unique party idea.

“We don’t eat out a lot, but when we do it’s Taco Bell!” Phillips told Parents.com. “I usually get Delta a cheese roll up but she had some of my soft taco one night and enjoyed it so I knew she would love this photo shoot. She is a big fan of cheese so the shredded cheese is her favorite but she also ate the lettuce, meat and tortilla. She isn’t too picky.”

The Taco Bell love doesn’t stop there. Philips also told the parenting website that her first date with her husband took place at a Taco Bell and her water broke in the drive-thru when she was about to have her second child.

Unfortunately, she wasn’t able to finish her meal since she was, you know, about to give birth.

The photographer for the special event, Julia Marie, wrote on Facebook, “Anyone who knows me knows how much I LOVE tacos! I could eat them for every meal… seriously! So you can only imagine just how excited I was to find out that Delta’s mom wanted to do a Taco Bell themed first birthday smash with tacos!”

“This session was so much fun and couldn’t have been any more perfect!” she wrote.

Commenters on the Facebook post thought it was a cute idea, too. One user said, “I’ve decided to do a 29+1 Birthday shoot. It’s going to look EXACTLY like this! Except instead of the cute baby, it will be me!”

Do you think the creative take on the “smash cake” is a fun way to celebrate a baby’s first birthday? Tell us in comments.