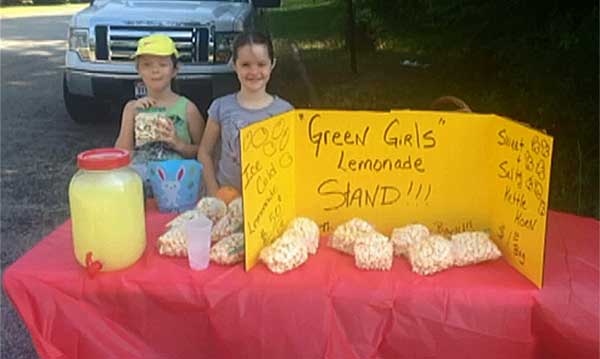 We focused on free-range parenting in this month’s issue and the narrative of fear that often prevents parents from letting their kids undertake worldly endeavors on their own. The narrative continues with Andria and Zoey Green, ages 7 and 8, sisters who set up a lemonade stand to raise $105 – enough for a Father’s Day trip to Splash Kingdom, a local water park.

The girls unknowingly bootlegged the powdered sugar water at 50 cents and bags of kettle corn at $1, New York Daily News reports. The pair had already raised $25 in an hour when the local police in Overton, Texas – who initially stopped because the stand was set up in a residential street on a sharp turn – showed up. The officers shut down the lemonade stand. The Green sisters’ offense? They lacked a peddler’s permit and an all clear from the health department.

I know when I drive by time-honored, summer lemonade stands, my first thought is always, “I wonder if those kids are flouting state health regulations?'”

The city kindly waived the $150 peddler’s permit, but under Texas law, food and drink that can spoil without time and temperature control – including lemonade – must undergo a health inspection prior to public distribution.

The fact the girls were selling powdered lemonade, not freshly squeezed from lemons, did not deter the officer’s decision.

“Their father works in the oil field and is gone a lot, so this is something they wanted to do for him,” Zoey and Andria’s mother, Sandi Green Evans, told KYTX-TV. “They are both little entrepreneurs.”

In 2011, a group of Maryland kids were fined $500 for setting up a lemonade stand outside the Congressional Country Club in Montgomery County without a vendor’s permit, CNN reports.

“This was such an innocent endeavor that turned into all kinds of government red tape,” neighbor Nelwin Perry says.

The Green girls’ story went viral, covered by CNN, USA Today, as well as a number of local media stations.

Splash Kingdom donated free tickets after the story made headlines and two local radio stations gave the family passes to Six Flags, KYTX-TV reports. However, Evans says not all the feedback has been positive.

While Evans acknowledged the police officers were upholding the law, she says it is that law that must be changed.

“If we can make change for all the children in Texas to be able to have a legal lemonade stand, then I’ll take this brutal beating from this community.”

During the hubbub, the Green family discovered a loophole, USA Today reports. The pair reopened their booth Saturday morning, gave away free lemonade and accepted donations. Evans says reopening the lemonade stand wasn’t about money or tickets, but teaching her girls to never back down.

So, when life gives your children a great dad, consult your local health guidelines before they set up a lemonade stand in his honor. They could become kingpins in a black market operation.

What do you think? Do young lemonade purveyors pose threats to community health? What would you do if the police shut down your child’s lemonade stand?