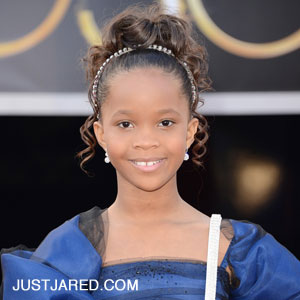 The Onion, a news satire organization that calls itself "America's finest news source," posted a rather risky tweet on the night of the Oscars, calling 9-year-old star of Beasts of the Southern Wild Quvenzhane Wallis the C-word. And by C-word, we don't mean cute, unfortunately.

The Feb. 24 tweet from @TheOnion, which read, "Everyone else seems afraid to say it, but that Quvenzhane Wallis is kind of a c—, right? #Oscars 2013," caused a stir immediately. Within minutes, people began responding to The Onion's vulgar – or, to some, comical – statement about the talented young Oscar nominee.

Writer Sabrina James, whose young daughter Kaia is a huge fan of the Beasts of the Southern Wild star, stressed in the Parenting.com blog "Mom Without a Filter" that actresses like Wallis deserve "standing ovations," not disrespect. James continued by emphasizing that the innocence of a child should not be shadowed by the fact that she is in the spotlight.

"The Onion is a site known for its sarcasm, and although I'm sure they didn't mean it, does that make it better?" James wrote in her blog post. "Am I supposed to laugh at the absurdity of the statement? Am I supposed to look at my daughter and think, 'Wow, it would be really really funny and smart if someone jokingly called her the C-word?'"

She continued, "When our children take their turn in the spotlight, they have the right to leave it unscathed. It's our job as adults to protect them."

While many parents, writers and bloggers took to their keyboards in fury over the tweet, others felt that it was at the core of what The Onion is known for: satire.

Time Magazine columnist Joel Stein reminded followers on his Twitter page that the parody news organization does, well, just that: create parodied news and entertainment coverage. In his tweet, he noted that The Onion wasn't targeting Wallis, but instead, targeting – and mocking – our celeb-crazed society.

"We got that @TheOnion was making fun of our celeb-obsessed, celeb-jealous, celeb-dissing culture and not Quevenzhane Wallis, right?" Stein tweeted.

For others, however, that just wasn't a good enough excuse. Some, like Twitter user @SeaLinc2, even felt that The Onion's statement was racist.

"WTF @ONION?? Show us the last time you all talked about a WHITE girl like that!!! Front page of fake news best have a real apology on it!" @SeaLinc2 wrote on Twitter.

And apologize they did.

"On behalf of The Onion, I offer my personal apology to Quvenzhane Wallis and the Academy of Motion Picture Arts and Sciences for the tweet that was circulated last night during the Oscars," The Onion CEO Steve Hannah wrote on its website, in a rare break in character. "It was crude and offensive – not to mention inconsistent with The Onion's commitment to parody and satire, however biting."