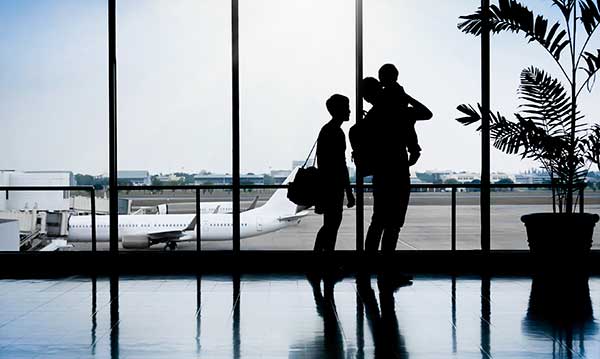 We all know what usually happens when a toddler starts getting fussy on a flight: grown adults start groaning and rolling their eyes, passengers look back and stare, but no one is actually inconvenienced except the red-faced parents trying to calm their child.

What happened when a child started crying as the plane taxied on one recent London-bound flight from Israel, though, is a completely different story. And sadly, we’re not even surprised.

The 19-month-old girl, Sarina, and her family were removed from the flight by armed security guards and then met by police because it was deemed a “security breach” when the toddler was crying because she had to sit in a parent’s lap for takeoff.

Her mom and dad (who actually bought the child her own seat) did follow instructions and strapped her in with a parent but – like any average toddler faced with an abrupt change – she continued to cry.

“I want to emphasise that we wanted to, and were, complying with the crew’s instructions,” the girl’s dad, Mark Aziz, told the Daily Mail. “I was simply trying to restrain our daughter who had become unhappy after being moved from a child seat on to our laps.”

Unable or unwilling to help, crew members on the Transavia Airlines flight made the decision to turn the plane around and force the family off.

If it seems like you just read a story like this the other day, you probably did. These ridiculous reports pop up much too often and are a reminder that we live in a world that doesn’t always respect the rights of children and families and places unrealistic expectations on the behavior of young kids.

Sarina isn’t even 2 years old yet. She couldn’t possibly understand what was happening and it’s no surprise that she was upset about being moved from a more comfortable position in her own seat. Unless she was able to break free from her parents and the belt and was running down the aisle (she wasn’t), then this wasn’t even a safety hazard much less a “security breach.” Is there some rule about crying during takeoff that we aren’t aware of?

What’s even more confusing about this story is that in a photo of little Sarina published by the Daily Mail, the girl appears to be strapped into a proper car seat with a five-point harness, which is considered the safest way to fly with young children and much safer than a parent’s lap. The Dutch airline’s website says approved car seats can be used on flights if you bought the child a seat, so we’re not sure what happened here.

Whatever the case, this much is clear: A toddler was unnecessarily traumatized, the family embarrassed and inconvenienced, and the commenters of the Internet got another chance to praise tyrannical airline practices and say how parents need to “control” their kids.

Parents can’t physically stop a child from crying and you shouldn’t want them to. It takes calm, patience and maybe some creative distraction techniques from mom or dad – all of which are hard to deliver when you’re busy being harassed by judgmental passengers and/or flight crew members. If this is how the airline treats a typically developing child, I shudder to think of how they would handle a child or adult with developmental delays.

People don’t all fit nicely into the little box (or tiny, cramped seat) that our society wants to place them in. These people were following the rules. What more can you ask for? If airlines want our kids to be quieter, try investing in roomier seating, seat-back entertainment on more flights and maybe even some basic training for flight attendants on how to work with families.

In the meantime, people should turn around and go back to their usual response: silently judging parents who are just doing the best they can. That’s apparently the best parents can hope for these days.