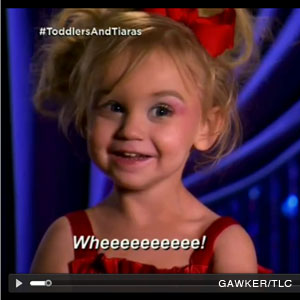 Toddlers & Tiaras is at it again: The latest hot-mess mama and her pageant star daughter made their show debut memorable for all the wrong reasons on June 7.

Listen, I love java as much as the next girl, but this is ridiculous.

In a video snippet from the bizarre TLC reality show, you can spot numerous no-no's by coffee-wielding pageant mother Tori Hensley. She justifies her not-so-sage – or safe – parenting choices by declaring that her family doctor approves of the caffeinated beverage, considering it's only one (giant) cup a day. (I'd like to know where this "doctor" got his or her degree … ).

Not only does mommy give Alexa a cup of Joe every day; she also feeds her a sugar-filled brew she calls "Tinker Tea" just as frequently.

At one point, her mother refers to her sugar addict toddler as "my little fiend" – just before giving her one of the Pixy Stix/Mountain Dew/sweet-tea concoctions. "But what child doesn't drink juice? She hardly ever drinks juice, and that's 98-percent sugar anyways," Hensley justifies. Who can argue with those statistics?

Commenter MrsRoberts413, for one – on an article in The Stir. "Sugary drinks are much, much worse (than coffee)," she fires off. "Actually, when I studied abroad in Costa Rica, they gave their toddlers coffee, black, in small doses … " Good point: Alexa drinks her mud with plenty of sugary Coffee-Mate before starting on the Tinker Tea.

In their introductory episode, mom takes the blond tot to dance lessons – where she is too hopped up to pay attention. After zipping around the studio in a sugar-induced craze for a while, little Alexa crashes from her high on the floor (aww, she needs her blankie). Who could've seen that coming?

This is apparently Hensley's way of giving Alexa a little boost to parade around in full makeup and way-too-mature, over-the-top dresses in front of complete strangers.

"Child abuse is rarely as 'sweet' as this. She is likely setting her daughter up for major health and social issues – but hey, as long as she WINS!" OneGoneGirl pointed out on this Huffington Post article, worrying – like a good swath of the public – just how dangerous the future repercussions can be.

Wow. Setting your child up for a lifetime of withdrawal headaches and diabetic struggle is not exactly what I would call great parenting. But I suppose this child pageant show isn't known for showcasing classy parents.