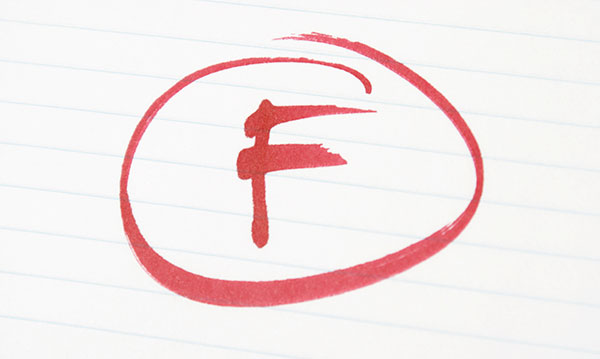 A Fairfax County, Virginia, mother begged her daughter’s high school to flunk her in English after the student garnered 50 unexcused absences, three-quarter term F’s and a zero on the final exam, which she skipped, The Washington Post reports.

The student’s saving grace? Her last quarter letter grade of A, which added to a cumulative passing course grade of D.

Encountering her daughter’s end-term “report card mysteries,” mom emailed all the student’s teachers on June 10 requesting that “she be given the marks she deserved,” but to no avail. Much to her dismay, her daughter will progress to the next grade.

The English teacher conceded that the student did not earn the A, The Post reports, but insisted the student’s terrible grades weren’t due to lack of comprehension but attendance, so holding the girl back wouldn’t likely benefit or motivate her academically.

She skipped the final exam due to the teacher’s policy that final exam scores only count if they raise students’ cumulative grades.

“Final grades may be based on trends in and mastery of learning rather than based solely on numerical averaging of quarterly grades for the year,” Fairfax County schools spokesman John Torre tells the Washington Post. “A teacher may decide to limit the impact of a final exam grade if they feel it does not represent a student’s mastery of the content. Limiting the impact of a final exam grade does not mean the final exam score only counts if it maintains or raises a student’s overall grade. That’s not the district’s policy,” he adds.

Meanwhile, the cheeky student told her parents, “she might hold the world record for getting passing grades despite doing nothing.”

Is that really something she should be proud of? Mom fears that her daughter will graduate high school without ever having learned to properly read, write a paper, present a project, etc., The Washington Post adds.

While I can’t speak for this Fairfax student, I will say I had a friend who experienced a similar situation in high school. Her English teacher passed her despite her failing grades her senior year and insisted that holding her back wouldn’t assist her academically. She graduated top of her class as well as speaks and writes better than most of our peers who passed the same English class with top marks.

Despite giving me an A my freshmen year, my English teacher frequently dotted my papers with complaints damning my writing. My favorite: “You’re not nearly as smart as you think you are.” When I met with a counselor to complain I wasn’t being challenged enough, I skipped sophomore English and was placed in Advanced Placement English at the junior level. I aced it and received college credit.

Moral of the story: Teachers need flexibility in their grading repertoire because no kid learns the same way, and showing up to class isn’t always conducive with retaining the material.

Perhaps instead of scoffing at her daughter, mom should take up arms against educators who continue to resist student acceleration. In regards to preparing the Fairfax student for a job that won’t condone such behavior in “the real world,” perhaps she simply needs schoolwork that presents more of a challenge.

What do you think? Tell us in the comments below.