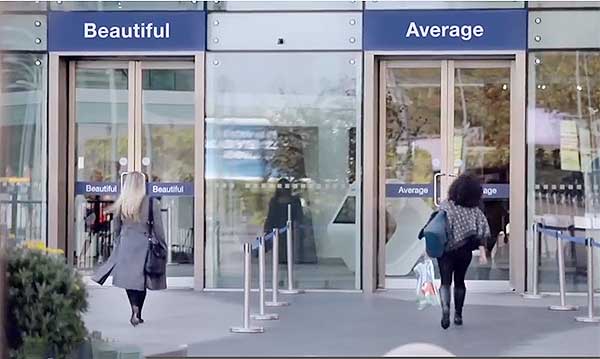 Dove is at it again. Not content to simply make inexpensive soap, shampoo and deodorant, the multi-billion dollar company released a new video with the goal of making women around the world feel prettier.

And while I’m all about lifting female self-esteem, this latest video (aka commercial) misses the mark by a long shot. The campaign called “Choose Beautiful” shows women approaching buildings with two doors. One is marked “Beautiful.” The other is marked “Average.” Of course, sadly, it seems most of the women chose to enter through the “Average” door.

Take a look at the video below:

There were a few bright spots: One mother, who’s clearly doing something right, leads her daughter confidently through the “Beautiful” door. A few other ladies boldly “choose beautiful.”

They express regret later about that, as do most of the ladies who undersold themselves. And it’s no wonder. It’s a depressing choice. Declaring yourself average in anything flies in the face of the American mindset. We all like to assuage our insecurities by believing that while we may not be as beautiful as Angelina Jolie, we’re at least NOT average. Surely, we’re a tick above at least, right?

But the real problem with this commercial is why does it have to matter so much?

Campaigns like this don’t really change how a woman feels about her looks. In fact, it just propagates the widely-held belief that a woman’s primary value is in her appearance. Young, middle-aged or old – most women are more preoccupied with our looks than our intellect, our talents or our character. Think about it: How many times do you fret over your wrinkles or cellulite in a year? Heck, in a week? Now, how often do you beat yourself up over NOT expanding your intellect or NOT doing enough charity work? Sure, we may do that a little, but not nearly as frequently as we deride ourselves for our expanding waistlines or the bad nose/teeth/whatever we hate about our faces/bodies.

I’m in the camp that we shouldn’t beat ourselves up about anything – looks or otherwise. But to focus so much of your energy on feeling shitty about how you look is a particular waste of time. For one, you often can’t change much about what you look like. Second, looks fade, no matter where you start on the beauty spectrum. It’s a losing battle. And it’s truly not as important as all of the other qualities you possess – being a good mother, good partner, good neighbor, good employee, good friend, good conversationalist, good cook, good dancer, good crafter, GOOD PERSON.

I’d like to see a day when a company like Dove tries this little trick again, and every women walks straight through that “Beautiful” door. But not so much because she thinks she’s gorgeous, but because she doesn’t even see that adjective as a word related to what she looks like. Why not see the word “Beautiful” or “Average” above a door as a choice about the day or life you hope to have? And the notion that the word describes the least important quality you possess won’t even enter your mind. Ladies, when that happens, we’ll really have progress.

What do you think? Is Dove’s campaign helpful? Or just a gimmick that misses the mark? Post your comments below!