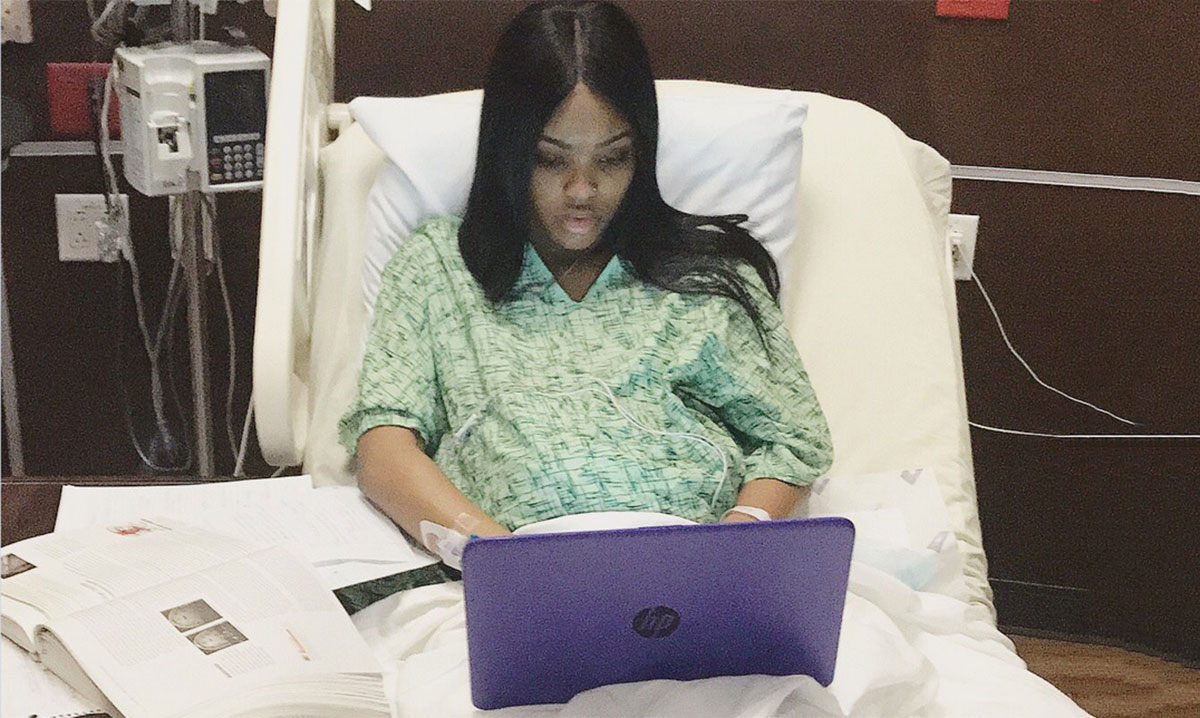 Seriously, we can do anything.

And that’s not saying that men or people that identify as both or neither gender can’t do anything they set their minds to because they definitely can – but it’s really important to remind women and girls of the strength they have inside because they don’t always feel they have it.

So, to remind them, here’s the story of Nayzia Thomas. This sophomore studying psychology at Johnson County Community College in Kansas City recently tweeted a photo of herself in a hospital bed on a laptop with the caption “my mom took this pic & it’s the perfect explanation of my life …”

Turns out, Thomas was in the hospital and in labor about to give birth to her first son a little earlier than expected and in the middle of finals, but she wasn’t about to let something as simple as childbirth stand in her way.

“(The exam) wasn’t due until the end of the week … but my goal was to try to have everything done before (having the baby),” she told Yahoo Lifestyle. “(I thought) ‘before all this gets crazy let me hurry up and finish this final.'”

She managed to get her last final on dissociative identity disorder done in just before giving birth to her son, Anthony, on Dec. 12.

And it’s a good thing, too, because she experienced major blood loss during the delivery and went into shock. Luckily, she was able to get a blood transfusion. And in the end, both she and baby are doing fine.

She ended her semester with a 3.5 GPA, which is just an incredible accomplishment. Kudos, Nayzia.

Seriously, though, I think that women and girls sometimes forget that we all harbor this kind of strength and determination.

In my experience, growing up in a rural community, there’s a lot of pressure on women to become homebound and let the man become successful, especially once the babies come along. It’s also common for families to spin the “Old Maid” tale when women don’t settle down and have kids by their mid- to late 20s – or choose college and a career instead.

Instead, we should be encouraging our women and girls to go for their goals, whether that is parenthood, a college degree, career or sport. There are strong women all over, women like Nayzia Thomas, who are killing their goals.

You can and should, too.

What do you think of Nayzia Thomas’ work ethic and do you think putting girls in a box is doing them a disservice? Let us know in the comments.