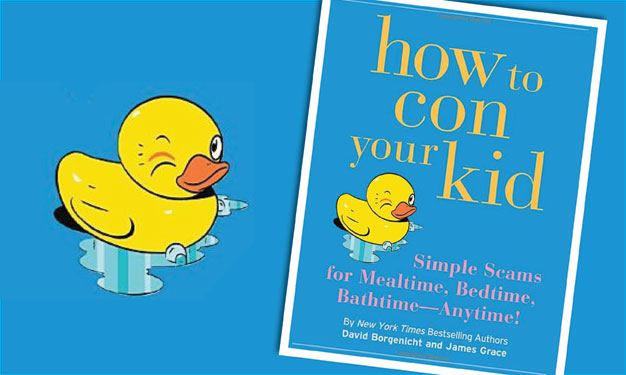 Let’s level: Being a parent is part flim-flam artist. Things we grownups value, like logic and compromise, to defuse flared tempers can fail us when it comes to an angry or cranky child. So. Why not fight fire with fireworks?

That’s where How to Con Your Kid comes in handy. This title from Quirk Books promises “Simple scams for mealtime, bedtime, bathtime – anytime!” We love that it’s written by two in-the-trenches daddy dudes: David Borgenicht, co-author of Worst-Case Scenario Survival Handbook and a dad of two, and James Grace, who helped write The Good Deed Guide and has three kids.

This definitely ain’t your standard parenting manual! These guys offer plenty of sneaky and clever ways to stay one step ahead of your kids – and diffuse some hot button scenarios. The folks at Quirk were kind enough to let Metro Parent riff on a few of the savvy tips in this highly entertaining, highly educational guide. Here’s a peek at the How to Con Your Kid style tips on getting kids to get going, start sharing – and the holy grail: stop whining.

You know the scene. Either your kid is glued to his or her bed – or she’s having so much fun, she stages a sit-down strike, pulling the “boneless and floppy” routine, as the authors put it. What can you do?

First, do a little preemptive planning. Giving an hour head’s up before you want to be out the door helps – coupled with a reminder a few minutes before you want them to actually start getting ready. Going somewhere? “Talk up” the destination.

As for the diversionary tactics: Stoke the fire a bit with the highly effective “Race you to the corner/Ready, set – GO!” approach. Play up distractions, too, like random landmarks that might pass by the car window.

Parents of toddlers: You know there’s often no reasoning to be had on this topic. So, what to do?

Modeling is hyper effective. Read ’em tales about sharing, the authors suggest, and “hype it up whenever your child does share.” A bit of praise goes a long way (as does having multiples of favorite toys or items!).

On the scene? When other kids come to play – preferably ones that are at least OK at sharing themselves – stash away those “special toys” your tot really loves (and will be less likely to want to share). And trying channeling the “Sharing Fairy”: Let little one know that whenever they’re caught sharing, they’ll get a sticker or stamp (like the clever little “Bribe Stickers” included in How to Con Your Kids).

If only it were that easy. In reality, of course, demanding your kid to sniveling or screaming typically only fans the flames. And consider the psychology here. “Partially, it’s to play on your emotions,” our dads say.

Reinforcing politeness at an early age is a good start – praising them when they say “please” and the like. Keep your own anger and frustration at bay; ditto demands. We love this gentle doozy: “Sweetie, just ask – you know I don’t like it when you whine.”

Teasing and acting befuddled can work wonders, too. Give ’em some over-the-top whining back, for instance (like when they’re not ready to leave in time). Or urge ’em to sing their woes, instead. All these tactics show kids just how silly whining really is. Or flip to page 97 and learn of the wonders The Whining Jar. (When all else fails, bribe!)