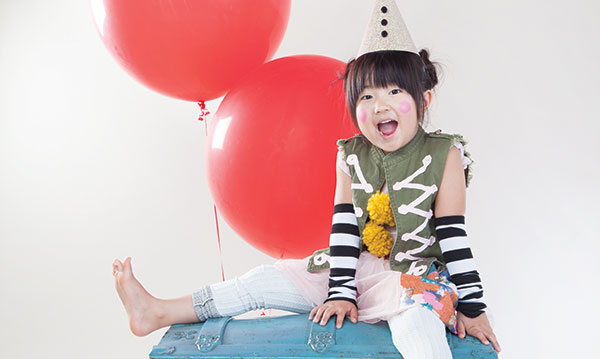 As under-scheduled kids, way before cellphones were even a thing, my siblings and I scrounged up our own fun. We free-ranged our neighborhood on nice days. In less-friendly weather, we pawed through boxes of fabrics, fancy hats, scarves and old footwear, emerging as cowboys, society ladies, horses, teachers and every profession known to humankind. We became The Jackson 5, fairies, French poodles, mail carriers and bank tellers. We were even astrophysicists, thwarting evil aliens!

Most adults recall a childhood memory of dress-up play, and parents of all ages share stories of their kids’ love for wigs, hats, lab coats and feather boas. My own sons’ daily routines included flowing capes and foam swords. Pretending to be someone else was always in fashion – never just at Halloween.

In the instant-gratification era of tablets and smartphones, dress-up may be forgotten low-tech fun, but it doesn’t have to be. There are plenty of reasons it should be among your kids’ – and whole family’s – favorite activities.

“Immersive play provides a sense of imagination. There is great freedom in it, so kids can explore,” she says.

It’s a bonus when kids dive into a costume box and cooperate to create a world of their own.

“It’s socially engaging, because kids are usually acting things out with another person, whether the child is playing dress-up with mom or siblings or friends.”

Life skills, bursting at the seams

For the youngest children, dress-up play offers a chance to try on different roles for size as they explore the world, says Jennifer Cantú Smith, kindergarten teacher at Henry Ford Academy Elementary School in Detroit.

“It really touches on every developmental domain,” Smith says. “Creative play helps build communication skills, the understanding of language and how to express yourself. It allows children to be their own storytellers.”

Studies show early exposure to spoken words is critical for language development, too. Essentially, the language and vocabulary that accompany role-playing ward off what experts call the “30 million word gap,” or the idea that kids from high-income families experience 30 million more words than peers from low-income families. Fewer words equals slower language growth.

For example, one of Smith’s young students said something “boggled her mind” – a phrase she learned during a teddy bear tea party with her dad.

When kids dress up, they’re building social-emotional skills. “It encourages them to engage in teamwork and to care about other people. It’s empathy learning,” says Smith, whose background is in early childhood education. “They are continually trying to figure out who is the teacher and who is the student, the doctor, nurse or patient.”

Preschoolers enjoy props, but by kindergarten and first grade, kids act out social situations or stories from books and shows, Smith says. In her class, it once happened with a simple pizza box.

“A student kept a leftover pizza box for a while, and the next thing I know, he’s sounding out ‘mushroom pizza, four dollars’ and making a little menu. This was a kid designing his own business, and others joined in. Some wanted to be waitresses, others wanted to collect money. It was their own little world,” she says.

And it’s always developmentally appropriate, says Smith. “It’s never too hard for them. It’s right on their level because they are leading it. It’s not a game where someone loses or wins. They can’t fail.”

The fun of being someone else

By donning a costume, kids build self-awareness by exploring character traits within their own personalities, Smith says. “‘Batman is brave and I can be brave, and when I dress like him, I am him.’ It’s amazing what kids’ brains are doing when they do something as simple as put on a fireman outfit.”

When kids dress in clothes typically associated with a gender other than their own, they are exploring characteristics of that gender, too – something parents of young children shouldn’t worry about, says Smith.

“Seeing your son pretend to be a princess can catch you off guard, but they are just children exploring. Give them the freedom to do that.”

Pretend doesn’t have to end

As kids grow, well-meaning adults may discourage costume play – but they may be overlooking its value for developing the prized adult skill of perseverance. A 2016 study of 4- and 6-year-olds who adopt the role of a brave character, like Batman, showed more “grit” when completing a task.

Laura Scribner, a multiage program teacher at Anderson Middle School in Berkley and supporter of dress-up play for all ages, wonders if we all “fake it till we make it” to cope with big life changes, like first-time parenthood or a new job.

While her now-grown daughters relished dressing as princesses with fancy gloves and businessmen with ugly 1970s neckties – then acting in custom-crafted plays – Scribner saw them trying on different identities. That’s something she sees her tween students do today.

“Girls in our age group experiment with makeup, which is a socially acceptable thing to pretend with,” Scribner says. Most days, someone is wearing a tail or cat ears. “It’s pretty rare to see a bandana that doesn’t get turned into something else.”

Plenty of pretend play emerges during Scribner’s cellphone-free weeklong outdoor camp, when students dive into a skit trunk and act out a short improvised play – which the older boys especially enjoyed.

“It’s license to act like little kids again,” Scribner says. “We stereotype that boys don’t want to have that type of play, but we don’t give them the tools, or they get called on it by friends. They loved every minute.”

When she was younger, Katrina Dioso liked mashing up X-Men and princess costumes. Now she’s 11 and into cosplay, which involves dressing up like characters from movies, comic books and more.

She and her mom, Stefanie Dioso, spend hours making costumes and elaborate props for manga and anime characters, like the sand gourd carried by Gaara from the Naruto series.

“We took balloons and papier-mâchéd them and glued them together,” says Katrina, who lives in Plymouth and just started sixth grade. “It was a long process because we had to wait for it to dry.” They also crafted a six-foot-wide fan carried by Naruto character Temari. Katrina shows off her work at Youmacon, a Japanese pop culture expo returning to Detroit Nov. 2-5.

“I really enjoy being creative,” Katrina says. “I like showing off my hard work” – and “when people can recognize what character I am.”

Sewing, papier-mâché and painting are all skills she’s honed along the way, along with creative vision, planning and fine motor skills.

Cosplay has also broadened Katrina’s interest in all things Japanese.

“Anime has influenced her artwork,” Stefanie says. Plus, “Katrina has expanded her taste in food … such as curry, squid and onigiri (rice balls) and has even tried to make some of these things at home.”

Shared creative interests have become a way to bond, too. “We are learning together,” mom adds. “We Google to see what worked for people and then figure out ways we can do it better.”

Because it requires creative solutions, cosplay is the ultimate in project-based problem solving – a sought-after skill for employers, says Tawny Letts, a grade 7-12 music teacher in Lansing. Letts attends cosplay conventions across the country and has served as special guest at Youmacon for her educational approach to the art form.

“Kids are able to create for themselves their own coolness, which really increases confidence,” Letts says. “They can build networks to a whole community of others with similar interests, and now it’s international. There are many cosplay influences with positive messages.”