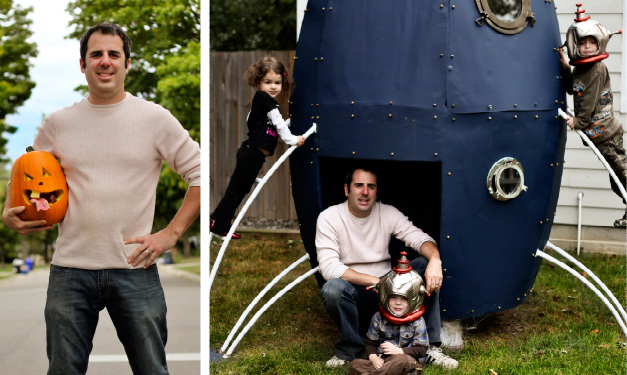 “Hi! I’m Tom Nardone. I like doing things that no one else has the guts to do.”

The Birmingham dad puts it best on one of his (many) websites. They’re dedicated to his oddball pet projects. Like guerilla urban lawn care. Fun pranks to save the earth. Turbo-sized picnic food. And vomiting jack ‘o lanterns.

That last one, ExtremePumpkins.com, is his claim to fame this time of year. You might catch him slicing up his over-the-top creations on Good Morning America or Late Night.

“Any ego I get by the last week of October is quickly gone by Nov. 1,” Nardone laughs, “and nobody calls! It’s very fun, though.”

That’s the motivation for this left-field Renaissance man – whose family lives in a modest home, complete with white picket fence, on Bates (no joke) Street.

It all started about four years back with a zany idea. Why not use power tools to carve pumpkins? Soon, he had a web home for the Pimple-Faced Booger Eater and pumpkins that ooze brains, shoot flames and, of course, puke. Since then, Nardone’s spawned three how-to books – and as many kids.

“Halloween is a great crafter’s holiday. It’s sort of do-it-yourself,” he explains. “That’s my bag. I like to make projects, but not too detailed.” And that’s the beauty of his icky work: It’s doable, typically in two hours max.

Gross-up your home for Halloween with five ideas from Tom Nardone’s Extreme Halloween, including fake blood and a crazy-scary “candy trap!”

His childhood Halloweens were fairly standard, Nardone admits. But he did have a small pumpkin patch at his Wakefield, Mass home. And there was a gorilla.

More specifically, a neighbor dressed up as one. He handed out candy – after scaring the bejeezus out of unsuspecting kids.

“That guy was the best,” he recalls. “Maybe he’s my real inspiration!” Sure enough, at his last home in Ferndale, Nardone was famous for “candy trap” disguises. Only one kid ever cried, he proudly reports. “Kids think it’s funny as heck.” To be honest, so does he.

During non-witching hours, Nardone’s a web designer. That explains his army of URLs. In fact, he’s got one for just about any season. On ExtremeHolidayIdeas.com, for instance, “I’m trying to add craziness to Thanksgiving,” from defrosting a turkey in 90 minutes to dressing one in a bikini. His latest start-up, Mower Gang, is a local group of folks with lawn equipment. They clean up public parks in the city of Detroit.

Fortunately, his family supports the zaniness. Wife Lisa’s his biggest fan, he says. When he’s jet setting, she mans the Halloween fort. His “disposable art” hobby is pretty low-clutter, which helps. And with his own little goblins, though, Nardone keeps it “G.” School-age Michael, his oldest, is giving carving a stab this year (with a kiddy knife, of course – not dad’s jigsaw). The twins, toddlers, will probably help “scoop the goop.”

Even in his annual photo contests at ExtremePumpkins.com, he sidesteps anything too gory. True, he still invents himself some blood-curdling costumes for Detroit’s Theatre Bizarre, an adult-geared masquerade carnival event.

But his own little crew? Last year they ventured out as Luke, Leia and Chewbacca.

“It was about the most adorable thing you’ve ever seen.”

Gig: Creator of ExtremePumpkins.com
Hometown: Birmingham
Wife: Lisa
Dad declaration: My No. 1 goal as a parent is to protect my kids’ innocence.