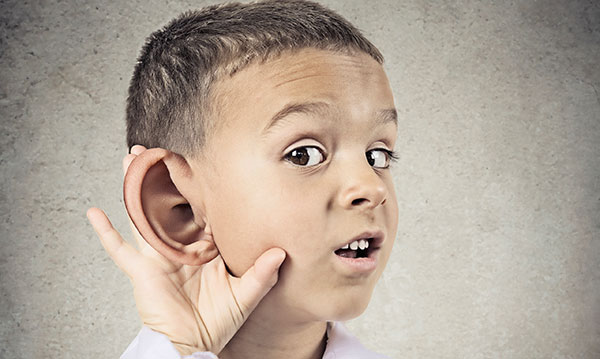 Kids are easy eavesdroppers – sponges that soak up gossip, media and other mature topics, often much to their parents’ chagrin.

And it’s not even on purpose. Children don’t have to be active listeners to overhear TV snippets on police brutality or political debates. Next comes the battery of “whys.” Dr. Robert Lagrou, D.O., a child psychiatrist and service chief of Henry Ford Health System Kingswood Hospital in Ferndale, calls this “information leak.”

While your child’s questions may cause you to break a sweat, know that eavesdropping “is a normal part of development – especially between ages 5-10,” says Lagrou. “Kids are naturally curious. It’s the best thing about them.”

Think about it: Limited to their homes and the playground at recess, kids are apt to learn much more from what they hear than raw experience.

“Most kids will seek out mom and dad and (mom and dad’s) friends to get a robust understanding of the world,” says Donald Deering, Ph.D., behavior modification specialist with the department of behavioral medicine at St. Joseph Mercy Oakland in Pontiac.

While you may want to reprimand your child for their adroit ears, take a deep breath – and try these suggestions from Lagrou and Deering (who encourage parents to pass on the urge to punish).

“I’m a big fan of transparency,” Deering says. If you dodge your child’s questions, odds are he’ll get answers elsewhere. Be upfront, so you’re the primary source of information he knows he can trust.

Or hedge your bets and approach your child before the eavesdropping begins – for instance, when there’s a tragic death in the family, Lagrou says.

Curious kids with open parents grow up with a holistic view of their place in the world and a better understanding of what they can do to change it.

Eavesdropping as a tool

There’s a time and a place to drop gossipy tidbits, Deering says – and sometimes, you can use it to your advantage.

“‘What are we going to do with little Johnny and his behavior?’ That’s a conversation that you want little Johnny to overhear a bit so he can either govern himself a little bit (better) or know that mom and dad are going to drop the hammer,” Deering says.

“Now, ‘who’s going to get custody?’ or which parent was engaged in infidelity – those I think are damaging conversations” better left behind closed doors.

Don’t panic when your child’s question shoots out of left field. First, ask him what he thinks he heard or saw.

“I think people might be surprised at their children’s answers,” Lagrou says. Chances are, their understanding doesn’t run as deep as you think. Plus, it buys you a little time to fashion an age-appropriate answer, Deering says.

Say your daughter walks through the living room while you’re watching CNN and you hastily reach for the remote – but not before she asks a question about a news flash on alleged police violence.

“Allow the kids to be heard, even if what they’re saying doesn’t seem relevant,” Deering says. Ask your child what she knows about the police, for instance.

“If the response is, ‘Well, I really think their uniforms are cool,’ you can obviously filter that.” In other words, there’s no need to dig into a sticky subject too deeply.

But if she says, “‘I heard that guy killed a bunch of people, and we’re going to kill him in return,'” that requires a more sensitive, thought-out response, Deering says.

Talk to your partner, too – preferably in advance. Figure out your feelings and talking points when it comes to mature topics. That helps avoid confusing and worrying your child, especially when her understanding is already fragile.

“A lot of times parents don’t have the same opinions,” Deering explains. “Parents need to share their (own) thoughts on (mature topics) so they have a united front when they approach the kids.” Strive to be as unbiased as possible, he adds.

“Whatever your emotional reaction is” to a child’s question, Lagrou says, remember: “They’ll gauge it.” So if you take a long time to answer a question or your eyes widen in horror, “They’ll pick up on that.” Be mindful, again, of not diving off the deep end and rattling off more information than they asked for.

“You can always tell kids, ‘Hey, let’s schedule a time to sit down and talk about this later,'” Lagrou says. But don’t wait much later. In general, like you do discipline – you may not immediately punish your son for slugging his sister, but you wouldn’t wait three days to deal out a punishment.

You can even explain some things are better left private. “Kids understand privacy,” Lagrou says. “My 7-year-old, Genevieze, wants privacy, so she knows what that means.”

Empower your child by giving a reason. “‘Because I said so,’ isn’t really a helpful statement,” Deering says. “It shuts kids down and makes them feel unimportant.”

Lagrou acknowledges it’s normal for parents to want to protect their kids from the big, the bad and the ugly.

Just remember, “Our kids are exposed to the world – it’s just how we choose to react” that determines what they make of it, Lagrou says.