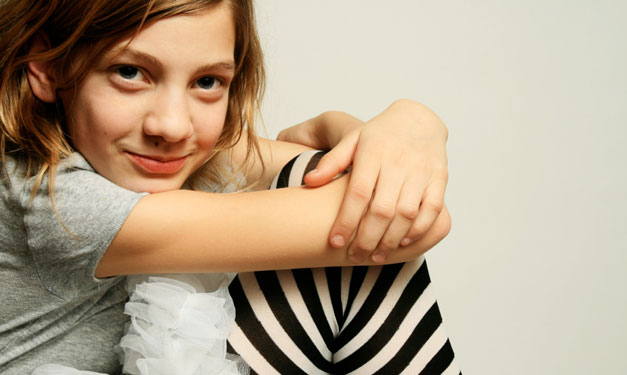 Kevin Reynolds knew he was in trouble when his daughter, Annabelle, started knocking her spoon off her high chair as a baby.

“It was a little annoying, but she got such a kick out of it that I let her do it,” says the Shelby Township dad. “I remember thinking, ‘This child is already controlling me instead of the other way around.’ What am I going to do when she’s a teenager?”

The answer was that he’d just be dealing with another stage and manifestation of his daughter figuring out what a lot of clever kids deduce – parents are fallible and can be manipulated to give kids what they want, whether that’s privileges, allowances or a big huge pass when they behave badly.

Does your child ‘officially’ have your number? Take our entertaining, totally unscientific quiz to find out.

That’s not to say kids are always being devious or scheming. As children grow, they’re learning how to assert their opinions, while at the same time trying to become more independent. It’s normal. Yet this might not be any comfort at 10:30 p.m. when your 5-year-old insists on staying up late because mom let him a couple days ago.

While your kids’ sometimes too-smart-for-their-own-good behavior might be developmentally right on track, that doesn’t mean you should cave to their sometimes dizzying logic or manipulations. Keep reading for seven tips to help you navigate those times when your savvy kids seem like they have the upper hand.

When it comes to the rules of your house, there are some that are non-negotiable, like not running across the street without looking both ways, and others that are negotiable, such as bedtimes. Rushing into a busy street – life-threatening. Getting to bed a half-hour late? Not so much.

Being consistent with these negotiable rules from an early age is key, explains Kathy Gleason, a mom and a licensed marriage and family therapist in Farmington Hills. Not only will you encounter fewer challenges on rules if you show consistency, as your child gets older (think: tween/teen years) and the rules become even more important, she’ll be more likely to obey.

“(When their kids are) a very early age, maybe 5 or even earlier, parents need to make sure they’re on the same page with each other about rules,” points out Gleason. Both parents should sit down together and write down the family rules.

When both parents agree on expectations, they can then more easily explain them to children – and, equally important, when a child tries to go from one parent to the other to get his way, he’ll know that he’s going to get the same answer.

“This is especially important when the parents aren’t together,” notes Gleason who advises divorced or separated parents to have regular discussions on negotiable and non-negotiable rules when it comes to parenting children.

Once you’ve established your list of rules as parents, you need to make sure that your children are aware of these expectations. You can handle this discussion a variety of ways, depending on the personality of your child and her age.

Gary Unruh, a licensed clinical social worker and the author of Unleashing the Power of Parental Love, suggests that parents meet with children regularly, even weekly, to review negotiable and non-negotiable rules. “Don’t make a huge list,” says Unruh. “You want to set it up so that both you and your child can be successful at following it.”

If your child seems to have problems understanding and following the rules, you may want to discuss these expectations more often with both your partner and your child. Once you have the rules firmly in place and both parents and children are doing well, an occasional reminder might be all your kids need.

It’s not realistic to expect that you’ll be able to – or that you’d want to – list a rule for every situation that might pop up. What about when your child comes home and asks to dye her hair blue like a friend’s? Unruh explains that a parent’s initial reaction might be just to say “No” immediately. Instead, he recommends that you listen to your child’s reasons for wanting to do something, especially noting her feelings before giving a decision.

You want to validate those feelings, instead of just talking about behavior, notes Unruh. So in the example above, maybe say something like, “I know that must sound really fun,” or “I can see why you’d like to do that” – and then go into your reasons why you have concerns. You can always save your decision for later. This approach can show your child that you’re considering her opinion and giving her ideas some thought. Again, use your child’s personality and the situation to guide your response.

Unruh explains that children will likely challenge parents on certain rules and expectations because of the experiences they have with peers. “With the onset of verbalization, children are constantly on a quest for independence,” says Unruh. “But part of that quest for autonomy relies, at least half of the time, on peers.”

In other words, kids often compare themselves to their friends and other kids at school, noting the differences. As they become more and more aware of “what other kids are doing,” that might be the argument you hear from your child to convince you to let her do something you wouldn’t normally allow her to do, like maybe dying her hair.

“There is no such thing as a perfect parent, or perfect parenting for that matter,” says Gleason. There will be times when your kids are tired, or you’re tired – or both – when some of your negotiable rules might need bending. In these instances, Gleason says a little explanation can go a long way. Take a day when you’ve come home from a long visit to the zoo and your kids are begging to eat dinner while watching TV. But what about your rules on “no food in the family room,” and “no eating dinner in from of the TV”?

Gleason suggests saying something like, “‘We’re all tired and so today we’re going to go ahead and do something special, or something different.'” When you approach it in this way, explaining that this circumstance is “special” or “out of the ordinary,” you’re not quite breaking the rule – just bending it a little.

“That doesn’t mean you have to explain everything,” continues Gleason. “There’s a range of where you can slip up and where you can’t.” Going back to the non-negotiable and negotiable rules, even if you’re tired, there’s no budging on the “no going across a busy street without a parent” rule for youngsters – whereas parents might bend the “no yelling” rule at times and a child might call them on it: “Dad, you said no yelling at our house and you just yelled.” For those instances, Gleason explains, “Maybe you can say, ‘It’s not OK for me to yell. I shouldn’t have done that.’ It’s important for kids to understand that parents are human.”

5. Let children have a say

One way to help children agree to and follow rules is to make sure they feel like they had a say in creating them. Making a list of expectations can help, but in day-to-day scenarios, getting your child’s input will make her feel like you’re listening to her point of view.

So, if we return to the example of tired parents and kids at the end of a long day, give your child choices – “Do you want to put down a blanket and have a picnic with PB&J sandwiches in the family room or we could do cereal right in the kitchen?” Younger children will need more specific choices to pick from, whereas you might offer tweens and teenagers a more open-ended question: “Hey, I know we’re all tired, any suggestions for dinner?”

Often, parents remember to enforce the rules – but not always to congratulate kids when they follow them. “Establishing good behavior takes more positive reinforcement than negative,” says Unruh. “The tendency is to be strict on certain things children do and then, when they do well, say nothing.”

Unruh says it’s crucial to take time to praise kids when they behave. This can come in a formal way, like if you are having weekly family meetings where you include a discussion of rules, point out that your kids have been doing a good job following them. Or more informally, when they listen on the playground and don’t throw sand, let them know you noticed; or, when you drive to grandma’s house and no one pinches or pokes a sibling, say thanks.

7. Practice what you preach

Kids notice what you do, says Gleason, “and as they get older, they’re going to be way more vocal on how they call you on it – especially pre-teens and teens.” So little things, like observing when a parent yells or cusses or any number of things the child has been told not to do but sees a parent doing, are opportunities for your child to call you out. That means you not only need to be consistent with making sure kids follow rules; you need to consistently watch your own behavior, too.