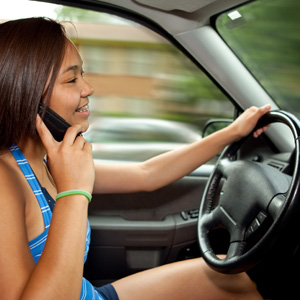 The new legislation, dubbed “Kelsey’s Law,” is named after Kelsey Raffaele, a 17-year-old girl from Sault Ste. Marie who was killed in a car crash while talking on her phone.

“The law means a lot to me, both as governor and as a parent of a young person who is learning to drive,” Snyder said in an official statement. “I appreciate the efforts of Kelsey’s mother, Bonnie, and family who have worked tirelessly to get the message out about the dangers of distracted driving.”

While Kelsey’s Law bars these young drivers from holding a cell phone in their hands while driving, hands-free phone systems and emergency calls are allowed.

Police are allowed to enforce it directly, but in most cases the law will be enforced after the detection of another moving violation, according to the governor’s office’s press release.

While a violation of Kelsey’s Law will lead to a civil infraction that will be determined by local jurisdictions, no points will be given to the driver’s record.

The law will go into effect late March of 2013 – and supplements a statewide texting-while-driving ban passed in 2010.

Reactions to the passage

The bill has been praised by organizations like AAA Michigan, which released a statement championing the effort to make teen drivers safer.

“We are very pleased that this law was passed,” Nancy Cain, a representative with AAA Michigan, told Metro Parent. “We solute Gov. Snyder and the legislators for signing this law.

“New teen drivers need experience behind the wheel and no distractions,” she adds. “This law will eliminate those distractions.”

Kelsey’s mother Bonnie was present when the legislation was passed and hugged Gov. Snyder once it was signed into law, according to an article from the SooEveningNews in Sault Ste. Marie.

“I know that Kelsey is up in heaven just clapping and screaming for joy over this,” Raffaele said, according to the News, “because of the lives that can be saved through her tragic death.”