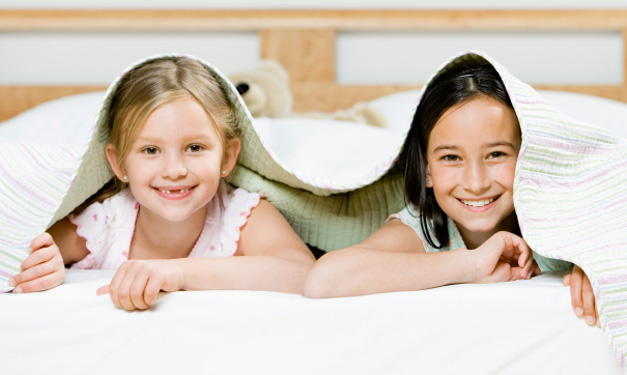 Snuggling with cozy linens, a thick comforter, fluffed pillows and maybe Mr. Teddy is a nighttime staple when you’re a kid. But for Marla Queen, so were things like ironing the bedding and forming crisp, hospital-corner folds.

“My mom was behind us with the proverbial white glove,” Queen recalls. “It wasn’t an enjoyable experience, by any means. It was, ‘Do it – or else!'”

Fortunately, that didn’t deter Queen who, with her husband, formerly ran The Queen’s Residence Bed & Breakfast in Ypsilanti. And she took a different approach to bed-making with her two now-grown daughters.

“I absolutely would not focus on the task. I would focus on the whole process of taking ownership for your things,” she explains. Not to mention, making it fun.

The “fun” begins before kids are ready to smooth sheets and stuff shams, says Brian Arrol, a pediatric occupational therapist.

“Make it into a game,” he says. His daughter, who’s 11, began by tugging pillowcases over her plush animals – just to introduce the concept. Or toss on the sheet and have kids crawl into the “tent.” Then, “as soon as they climb out, the sheets are basically onto the corners,” Arrol says. Even a 3-year-old can help by jumping on the bed: Tootsies shuffle sheets (roughly) into place.

Being able to grip, pull and fold that soft material takes a few more motor skills – along with attention span and attitude. That makes kindergartners prime candidates, Arrol says, since they’ve mostly shed the “I don’t wanna’s.”

Weekends are a prime starting point, since there’s no school-morning bustle. In the Queen house, it began as a “big girl” thing to do with mom, who would take care of pulling up the bedspread and putting the pillows on.

“Once they get that kind of concept, you almost work backwards,” Queen says. Getting the lumps out of the blanket might be added to the process the next time. Then comes puffing up and pulling down the billowy sheets.

Early on, Queen’s girls were so gung ho, they would sometimes try to tackle the chore alone, turning the bed into a comically bumpy landscape.

“Of course, they go off and you do it again,” she chuckles. “I think you have to get them enthusiastic and get them proud about their accomplishments. You don’t want to get into, ‘That’s not right.'”

Arrol agrees that bucking perfectionism is key. And get a child’s input for improvement, such as saying, “Let’s see if we can straighten it out. You pull this end; I’ll pull that end.”

Take the trickier stuff in stride. When changing those unwieldy pillows, Arrol suggests using oversized cases – so kids can pitch in without feeling frustrated. For tougher tasks like getting fitted sheets or mattress pads on, a friendly bout of tug-of-war at opposite corners can make light of a tight situation – and make the task a bit easier. Fresh-smelling linens hot from the dryer help kids “warm up” to the chore, too.

Of course, skirting that “chore” label early on is important – as Queen can attest. But at some point, the encouragement can wear off and leave many kids to bemoan bed-making.

Queen admits she hasn’t been above using a smiley face chart system for an incentive boost. Arranging favorite plush pals on the bed is another way to divert kids from the “grumpies,” she says.

But don’t forget her rule of thumb: “Too much rigidity is not a good thing.” If it works best for kids to brush their teeth, eat and then make the bed, that’s far from a worst-case scenario.

Self-care is the lasting lesson, Arrol says – and that can only happen when kids are eased into a pattern. And long term, even though there’s nothing like crawling into a tidy bed, those sharp “tucks” aren’t crucial, Queen says.

“All of us slack (off) every once in a while. It’s that larger picture you’re going for!”