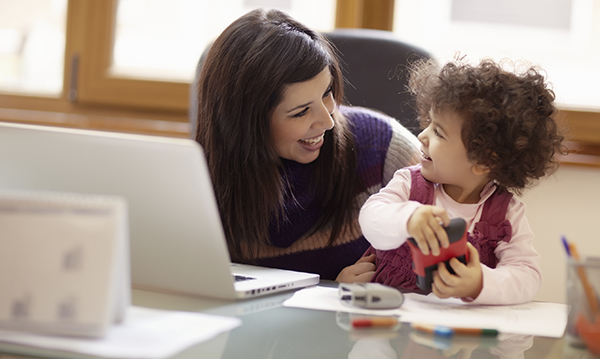 It’s a generations-old conundrum: Is it better for mothers to work full- or part-time? Well, according to a 2012 Pew Research Center study by Kim Parker and Wendy Wang, there’s been an increase in numbers of moms who prefer full-time work.

The study, was based on a survey of 2,511 adults nationwide and an analysis of the American Time Use Survey, noted that the percentage of women with kids under age 18 who “lean” toward full-time gigs bounced from 20 percent in 2007 to 32 percent in 2012.

Breaking down the facts

For many, this may not be news. Who hasn’t heard about Yahoo! CEO and president Marissa Mayer, dubbed Silicon Valley’s “workaholic,” only taking two weeks maternity leave? (She also recently banned telecommuting at Yahoo!, which means employees can’t work from home – and is building a nursery next to her office). Coupled with Facebook exec and mom Sheryl Sandberg’s “Lean In” memoir/message – saying women should pursue their work passions vs. pulling back – the 40-hour (or more) workweek for moms has been a hot topic.

Still, while Pew’s findings may imply more women are jumping on the full-time-work bandwagon, the study doesn’t exclusively affirm this notion.

In fact, it also found a strong correlation between financial well-being and a mom’s views on the ideal work situation. In other words, tough economic times may be a factor in why more women prefer full-time work – especially since women in the most difficult financial situations were most likely to call “full time” better.

And consider this: More American adults (42 percent) feel it’s “ideal” for a child to have a mom who works part-time. According to the Pew survey, only 16 percent said the full-time working-mom situation is best – and one-third voted “non-working” mom.

So, what do local moms here in metro Detroit think?

Erica Tank, the owner and executive director of Green Garden Child Development Center, says while part-time work is the ideal, it’s just not always financially possible. Tank works 50 to 60 hours per week, but she’s in a unique situation where she’s able to bring her son to work, feeling reassured he’s in good hands – which, she says, isn’t the case for many women who work in inflexible corporations.

Tank adds that the part-time working mother is not necessarily the “child-ideal.” Instead, she thinks there should be more focus on creating places where children can be taken care of and loved, even when not with their mothers – which is what she sought to do by creating an organic, free-of-chemicals daycare.

Yet parents have found other creative ways to balance financial and parenting obligations.

Local mom, Justina Deel, says she alternates her schedule (4-10 p.m. Monday-Friday) with her husband. That gives her a full hands-on approach to raising her son, while avoiding the additional costs of daycare.

Deel is not the only one that coordinates with her spouse to balance the demands of work and parenting – which really is full-time duty itself, right?

“The only way I can manage to work as much as I do (50-plus hours) is with the support of my amazing husband, Jeff,” Commerce Township mother of two and former Quicken Loans employee Shayna Levin said. “He has a flexible job that allows him to step in when I can’t be somewhere. I truly don’t know how working moms do it without a big support system.”

“If only because I believe that it’s part of a woman’s biology – to need to be with her kids more,” she said. “I’m no scientist, but I can say, hands-down, that every working mom I know feels like she’s missing out on things with her kids when she’s at work.”

Still, other moms have been able to puzzle out a part-time workload – one they say lets them better balance their parent/work obligations.

Kristen Farrar, mother of three, traded her position as a full-time director at a child development center to become an assistant director with a part-time schedule.

Her reasoning? She wanted to spend more time with her kids – and felt she was able to better juggle the family-life demands without feeling torn.

Women are also feeling an immense amount of pressure and guilt to “do it all,” Gale Sase adds. Whether on TV or in magazines, depictions of the do-it-all, have-it-all mother – kind of like Mayer of Yahoo! – are everywhere, and women are increasingly feeling that they need to meet those standards.

Gale Sase’s greatest emphasis, however, is on the lack of workplace flexibility for women – often forcing them to choose between ultimatums.

She explains that the 40-hour workweek was developed for men by 1937, “because they had someone at home to take care of the domestic obligations,” she said. “That 40-hour workweek is not prioritized to working women. Women have changed, and they’re entering the workplace, but the workplace hasn’t changed.”

For women who do not work part-time or have flexible workplace schedules, Gale Sase recommends kids be left with an individual who can show the child love and preferably was not getting paid to do so – like an extended family member. However, Gale Sase also noted this might not be feasible for all women. In that case, she adds, the best way to balance motherhood is to get creative.