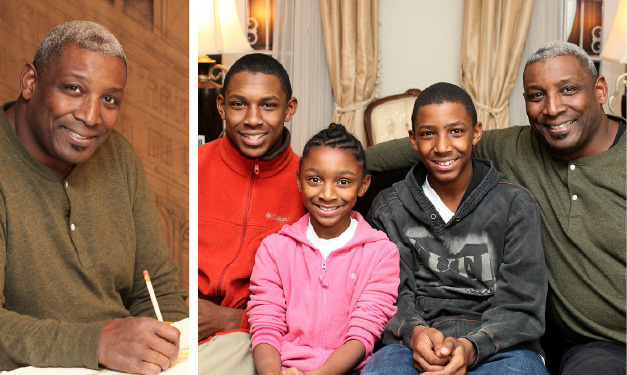 Hubert Massey is name is big. Even if you’ve never heard it, you’ve probably seen it – by way of his sprawling public art, which dots Detroit landmarks.

But this respected artist, who also calls the city home, got a special hand on one of his latest projects, the “Spiral of Life” mosaic mural in Mexicantown.

“My kids helped after school,” making and cutting out clay pieces, Massey says. “I’d pick ’em up, take ’em with me and put ’em to work!”

It’s just one way the busy dad crafts family time, too (no easy task when 16-hour days are normal). Because that’s his biggest love of all.

“We meet as a pile for dinner,” he says.

Scale-wise, Massey – who stands 6’2″ – has never settled for small. Growing up in Flint, he found early passion for both arts and sports. His mom taught him to doodle cartoons like Mickey Mouse. Classmates caught wind of his skill.

“Everybody used to come to me to draw their maps” for school assignments, he recalls. “I really took a strong interest in drawing.”

Ditto for athletics. His dad shot hoops for Arkansas A&M. At Grand Valley State University, Massey was an All American-nominated football star and discus record holder. When a knee injury slowed that success, art amped up, and Massey studied plenty of it in Europe.

His first major canvas back home: Billboards. From Coke to smokes, he hand-painted photorealistic ads, the norm till the early ’90s, up to 200 feet in the sky – for a good dozen years. Fear of heights? “I got over that in about two days!”

It also paved the path to his true passion: frescos. Think Diego Rivera’s Detroit Industry mural at the DIA. Massey’s the real deal, one of only a few artists still keeping alive the complicated, multi-layered art of painting with wet plaster.

“I understood working on a large scale and moving kind of fast,” explains Massey, who got hooked at a workshop taught by two of Rivera’s actual apprentices. “The surface is not waiting for you, because it’s drying out.”

He loves the process, too. From sketches to jumbo “cartoons,” he pre-draws a fresco four or five times. Then he builds up several layers of plaster.

Massey also loves talking to communities to get their input.

“When you do monumental pieces, there’s a responsibility that comes with that,” he adds. “I sort of see myself as a 21st century hieroglyphics person that tells your story. I’m translating that history.”

Examples range from the “Spiral of Life” piece on the new Bagley Avenue pedestrian bridge in Mexicantown to the “Ring of Genealogy” at the CHWMAAH, which chronicles the struggles and strides of blacks in the U.S. And his fresco at the Flint Institute of Arts features an image of his mom.

With his own four kids, who range from their tweens to 30s, Massey and his wife, an auditor (“We’re like yin and yang,” he laughs), have fostered an open page. “Never told them” what to create, he says; “just gave them freedom to draw.”

They’ve taken that in different directions, from son Jordan’s interest in environmental engineering to little Lia’s knack for fashion, sewing and writing. Dad has a garage studio, too, so he’s often nearby filling roles from chef to chauffer.

Oh, and one other priority: teaching, especially kids, about giant art – how it’s done, and why it’s so valuable.

“If the Pyramids of Giza were only two stories tall, it would just be another building,” he says. “It wouldn’t reign and last forever in the minds of people.”