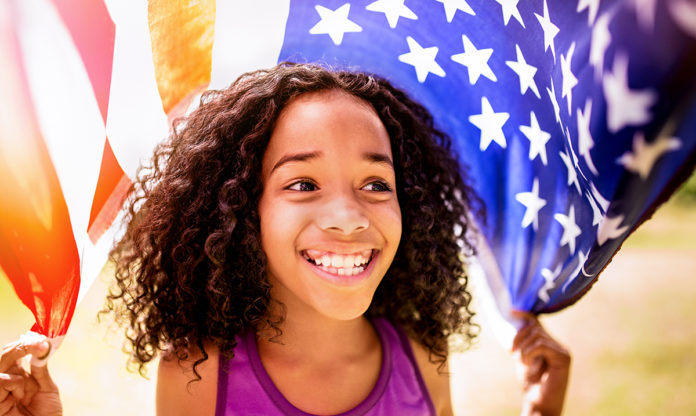 Beautiful cities and landscapes running from the east coast to the west, a melting pot of people and viewpoints, the freedom of speech, religion and the ability to vote in our democracy and protest — and so much more.

While our country isn’t perfect, there are a lot of things to appreciate about living here in America and southeast Michigan parents who have pride in the United States of America may be looking for ways to instill that same patriotism in their little ones. So, what is important to teach them about our country, its customs and its history? What should kids growing up in America know about this nation?

Two social studies teachers, Amy VanEeuwen and Lori Langenderfer from Plymouth-Canton Community Schools’ West Middle School,know all about teaching kids about America, being that they teach U.S. history in their classrooms.

The two educators, who are also moms, have some suggestions for what parents should be ensuring kids in America know. Plus, elementary school teachers from Rochester Community Schools add to the list.

1. Learning about the Pledge of Allegiance

“The first thing that actually popped into our heads was the Pledge of Allegiance and what it means,” says VanEeuwen. “So many times they just learn to say it that they have no idea what it means.”

Aside from learning the meaning of the Pledge of Allegiance, you also can learn about how to respectfully display the American flag. Brush up on proper American flag etiquette here.

2. What to do during the national anthem

Does your child know what to do at a sports event when The Star-Spangled Banner, our country’s national anthem, is played or sung? It’s one of the ways to show patriotism for our country – and it’s one of the top lessons VanEeuwan and Langenderfer put on their list.

“So many times they’re fiddling with their phones or they keep their hats on,” VanEeuwan explains.

Outlined in the United States Code, during the national anthem, you should stand at attention and face the flag, or face toward the music, with your right hand over your heart.Men not in uniform should remove their hats and hold it with their right hand, putting the hat over the left shoulder so their hand is still over their heart.The guidelines are a bit different for those in uniform.

You can also use the national anthem to explain the right to assemble and why some citizens are participating in the “Take a Knee” protests against police brutality and racism, too. Find a breakdown of what these protests are all about here.

There are many brave Americans serving in the military for our country, or who have served in the past. VanEeuwan says kids should learn to “honor soldiers who have served or died.”

“It doesn’t matter if you agree or not with what they were doing, but it was the fact that they’re willing to die for our rights,” she notes.

To converse about this topic, and teach about soldiers, Langenderfer suggests, “If you go to a parade, for example, and you see soldiers walking by … talking about what they did” and why it’s important to show them respect – “Especially for families that aren’t military families,” she notes.

Another addition to the list? “To know our basic freedoms and respect that others have those same freedoms,” VanEeuwan says.

Freedoms such as those outlined in the Bill of Rights (the first 10 amendments in the U.S. Constitution). This important document in American history is the decree that allows us the freedoms of speech, religion and freedom of press – and that’s just the First Amendment.

Learning that everybody has the freedom to hold different opinions and beliefs is valuable. “So often, especially for kids, they want everyone to be like them. Anybody who’s different, they don’t understand,” VanEeuwan notes.

As a democracy, there are core democratic values fundamental to America – “Things our country was built on,” VanEeuwan explains. Those include common good, justice, liberty, popular sovereignty, life, equality, diversity, pursuit of happiness, truth, patriotism and rule of law.

Langenderfer, who has three daughters, suggests conversations like those she’s had with her own kids. What do these words mean and what do we have as Americans? “And then, what are some examples we see of that?”

She suggests talking about places in the world striving toward these freedoms, and what it looks like when people don’t have certain rights.

Something all kids in America should learn: How our government works here in the United States.

When teaching kids about government, teach that, “We have three branches,” VanEeuwan says, and kids should know, “Who makes laws? (What are) the rules of the Supreme Court?”

There are resources online to help kids understand and learn about our branches of government, how laws are made and more.

Another great way to learn more about how government works, even on a local level, is to take your child to an open coffee chat or meeting with a politician. You can meet their staff and learn more about what their job is this way, Langenderfer says.

7. Our responsibilities as citizens

“Being an active and involved citizen is the best way to support our country and keep it strong,” adds Monica McCauley, fifth-grade teacher at Hampton Elementary in Rochester Hills. “This is a government for the people and ‘by the people,’ and we need to understand that our involvement is crucial to our success as a nation.”

What does it mean to be a good citizen in our country? VanEeuwan says our responsibilities include: “things like voting, paying attention to issues – especially in your community.”

To teach this, families might decide to volunteer and find a way to contribute to their own community, maybe by cleaning up trash in a park or running a clothing drive locally, Langenderfer says.

When it’s time for elections, take your child voting with you to show them the process and explain to them how you decide what’s important to you without passing your political views onto them.

8. People and places significant to our nation’s history

There are people who contributed to our country in various ways, and locations families can still visit that are significant to America’s story – all of which are important for kids to learn about.

“We take a yearly trip to (Washington) D.C. with the eighth graders just to see our government working and to see how we honor our presidents – (and) not just presidents, but important people who helped put our nation together,” VanEeuwan says.

You can make this history come to life by taking the kids to a local history museum (there are plenty of historical attractions around southeast Michigan alone!), or on a vacation to an area like the District of Columbia or Boston.

Even on the way to another destination, you can find historic spots along the way, Langenderfer says. Take an opportunity to explain why the area is significant or why a certain historical figure is important. Find a way to relate it to your life today.

Michelle Ingraham, a fourth-grade teacher at Brooklands Elementary School in Rochester Hills emphasizes the importance of the diversity of our country.

“America is the world’s melting pot,” she says. “Our immigrants brought much more than suitcases – they brought their culture and traditions. That is what makes our country what it is today!”

Lastly? Knowing, “we have a history that isn’t perfect, but we can continue to work toward everyone (being) equal now,” VanEeuwan says. She notes her eighth graders learn about the Native Americans in America, Reconstruction Era and Jim Crow laws.

These may be tough conversations, and you may decide to have them with kids as they get older, but Langenderfer suggests, “You have to put it in perspective and in context.”

Teach kids about these moments of our country’s history while still talking about why they were not OK. She notes teaching about slavery and other pieces of America’s history, like the Jim Crow laws, ensures the stories continue to get told.

“What did we do and why was it wrong and what can we do to make sure it never happens again?” she says.

An overall lesson for the future

What are the overarching values we should instill in our children that can contribute to making our country great through the years to come? The lessons of love, responsibility and community, says Marisa Kalmus, fourth-grade teacher at Hamlin Elementary in Rochester Hills.

“If children understand the importance of being contributing members of their communities then they will grow up to be active, caring citizens. These three values are integral in making our country a stronger, safer place to live.”

Do you have any other teaching to add to this list? What do you believe in teaching kids about America and its history? Comment below about what’s important to you and the ways you teach your children about them.