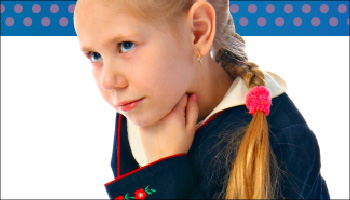 The zealous tyke in line at the grocery store. The 3-year-old who can’t sit still long enough to hear mom or dad read a story. These behaviors seem normal to most parents, depending on age and development. But could your child also be showing signs of attention deficit disorder or attention deficit hyperactivity disorder?

"It’s estimated that 10 percent of children have this problem. That’s one of the major problems we see with children nowadays," says Dr. George L. Blum from Southfield Pediatrics.

Kids with attention deficit hyperactivity disorder (ADHD) have frequent, severe problems that interfere with their ability to lead a normal life, according to the American Academy of Pediatrics.

"Many of these children have some abnormal concentration of what are called neurotransmitters," Blum says.

When it comes to determining what attention deficit disorders, Blum weighs in on the factors he looks for.

In the first few years of life, hyperactive babies tend to be poor sleepers. As they develop, they can’t concentrate or sit still long enough to be read to, for example. Once they begin preschool and kindergarten, they aren’t interested or focused on what they are doing or learning.

"These children can’t remember what they learn," he says.

The American Academy of Pediatrics includes impulsivity in its list of symptoms, as well. Speaking or acting out without thinking, often interrupting other people, are examples of this behavior.

Blum encourages parents to talk to their child’s physician, so the child can be treated accordingly – with medication, behavioral therapy or both.

"For many people with ADD or ADHD, stimulant medications boost concentration and focus while reducing hyperactive and impulsive behaviors," notes HelpGuide.org.

Medications including Ritalin and Adderall are suggested, although Blum acknowledges parents are reluctant at times to put their kids on medication – because they think their children will have to take it for many years.

"There are many who go into adult life who still need medication," he says. However, these factors are based on the individual. And if this condition is not treated at a young age, there can be long-term problems.

Getting ADD and ADHD treated or under control is imperative to your child’s growth.

Many of the kids who go undiagnosed or untreated will have problems in high school, including bad grades and inability to qualify for sports.

In addition, Blum says, "They have trouble with social skills. They don’t like school."

Paying close attention to the signs of attention deficit disorder and talking to your doctor will help get your child on track.