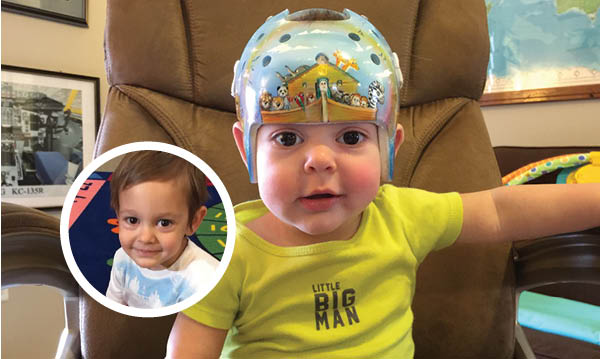 The diagnosis was a shock: congenital muscular torticollis, which locked Cameron’s head in a tilted position – resulting in a flat spot.

“I had never heard of anyone’s child ever having torticollis,” Stacey says. The rare condition twists the necks of 1 in 250 infants. “He wasn’t seeing anything on his left side and his muscles were weaker.”

At first, she says, “I was angry.” Then, she took action.

“It’s very lightweight,” Stacey says. “We had to basically wean him into it,” until he was wearing it 23 hours a day.

Every few weeks, Cameron was taken to his local Wright & Filippis so the foam inside his helmet could be adjusted to fit his growing head.

“I wanted to make something fun” with the helmet, Stacey adds, so she took it to a nearby airbrush studio for a Noah’s Ark makeover.

“It was his nursery theme,” she says.

Physical therapy was part of the process.

Starting at 2 months, Cameron visited Stilson Specialty Center–Clinton Township multiple times per week. By reaching for and holding toys, he stretched and strengthened his tight neck muscles in the clinic and at home.

In March 2016, Cameron was fully weaned off the helmet.

Today, Cameron is an inquisitive 2-year-old.

He loves Daniel Tiger and pushing his toy lawnmower just like his dad, Steve. His family is also managing his unrelated diagnosis, tuberous sclerosis complex – a genetic disorder that can cause benign tumors.

“We are fortunate it is a mild case.”

As for helmet therapy, Stacey says, “I think it’s worse on the parents. Your child won’t even know it exists.” And, she adds, “Painting the helmet adds a little fun and comfort to the whole experience.”