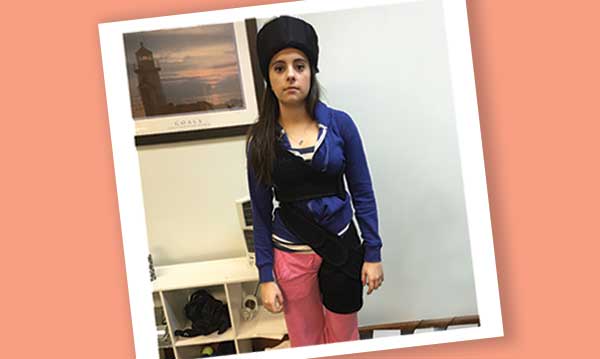 Any kid with severe scoliosis – a curvature of the spine – knows: Traditional treatment braces are awful. They’re big, bulky and take a long time to do their job. But a New Baltimore clinic is offering an alternative that’s comfier – and quicker. It’s called Scoliosis Activity Suit. And, at Anchor Bay Spine Center, Dr. Art Niederkohr is one of five docs in the country certified in using it to treat an issue that emerges between ages 10-15, the National Scoliosis Foundation notes.

“The suit actually uses the body’s active resistance to de-rotate the muscles and elongate the spine,” says Niederkohr, a chiropractic and scoliosis expert. “It’s lightweight, you can conceal it under your clothes, and you only have to wear it between 20 minutes and four hours” while standing or walking. That’s way less than the 15-23 daily hours of rigid braces.

A flexible torso wrap that uses a leg as its base, each suit is personalized to the patient and made from a material similar to Under Armour. Niederkohr says he’s seen “mild to signification reduction” of curvature in 85-90 percent of 60-plus patients (one came as far as Pakistan).

It’s super simple to put on, too, says local patient Sara Zenelli, 17, of Macomb Township. “It’s Velcro, so you wrap it around yourself, keep it on and stand,” she says. “That’s it.” Sara, who’s used the suit about a year, has gone from a 19-degree curve to not having scoliosis.

The suit has Michigan ties, too: It’s the brainchild of Dr. Mark Morningstar, who has practices in Grand Blanc and locally in Richmond. So far, none of Niederkohr’s patients has had to go back to a brace.

“I’ve done other things in the past that were either too painful or took up too much of my time,” Sara adds. “It’s practical, easy to do and the results are still there.” SAS is typically available for kids starting at age 8, up to adults. Only 10 percent of folks who inquire aren’t candidates, Niederkohr says.

Ask about free scoliosis screenings on Wednesdays and Saturdays, too.