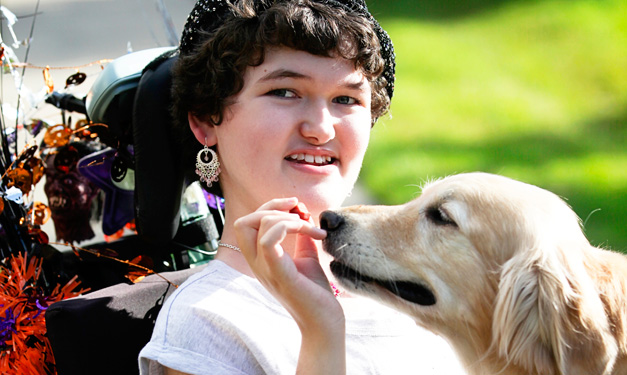 Suzanne Williams knew having a service animal would change her daughter's life. She just didn't expect how much.

Four years ago, the Canton mom traveled with her then-9-year-old daughter, Erinne, who is confined to a wheelchair, to Canine Assistants in Georgia, to participate in a two-week intensive training program that matches people with special needs and highly trained service animals. She figured that Erinne would grow to love the dog that was to become part of their lives – Erinne's always loved animals. She also thought that the dog would help Erinne become more independent and even make friends more easily.

What Williams didn't count on was that as Erinne's bond with her service animal grew, her personality changed. "That wasn't something I expected," says Williams. "(Erinne's) more assertive now and willing to talk to people. She's just more outgoing than she used to be."

While many people think of service dogs as helping out with everyday tasks, the relationship between the individual and animal has the potential to go far beyond physical assistance. Especially when it comes to children.

Having a canine companion can help kids not only make friends, but also avoid loneliness, explains Meghan Hopkins, the aftercare coordinator at Canine Assistants, a nonprofit. With the confidence that comes from knowing that they have a dedicated companion, kids with service animals often feel more able to participate during school and reach out to classmates.

"Initially, with Erinne and Latte (her service animal), it was a kind of relationship of 1+1=2," says Williams. "But now their relationship has taken on a whole different equation. It's more like 1/2 + 1/2=1."

Although there were some complications during delivery, Erinne Rose Williams seemed perfectly healthy when she was born May 16, 1997. But as Erinne got older, mom noticed her daughter's difficulty with mobility.

Unlike Williams' older two children, Erinne wasn't pulling herself up to stand, and she chose to stay on her belly to crawl – even though she'd learned to move on her hands and knees. Concerned, Williams sought advice from Erinne's pediatrician and then a slew of experts. Finally, a pediatric neurologist was able to diagnose Erinne's condition: she has spinal muscular atrophy, or SMA.

Erinne has been hospitalized well over 22 times and gone through at least as many surgeries to help stabilize her condition.

According to the Spinal Muscular Atrophy Foundation, this disorder occurs in as few as 1 in 6,000 infants – or as many as 1 in 10,000. Depending on the severity, children can live into adulthood.

When Erinne was 5, Williams began researching service animals. She found that few organizations offer animals to kids, pointing out that youngsters may not have enough skill to properly train the animals and that the animals would then become pets. Williams found two willing organizations – one in Ohio and the other Canine Assistants in Georgia. After filling out the necessary paperwork, they waited. By this time Erinne was 6.

Three years later, in March of 2006, Williams and her daughter traveled to Canine Assistants in Georgia in the hopes of finding the right service animal for Erinne.

Finding the right service animal isn't simply a matter picking out a dog.

During training, service animals form a bond with their trainer that will need to be transferred over to their new owner. This indescribable connection between animal and person is something that can't be taught – it's something that has to happen as dog and person work together.

At Canine Assistants, applicants attend a two-week training camp to learn the proper way to work with a service animal and to give commands that the dog can follow. Of those first few days at camp, Williams says it was something like speed dating for Erinne. In the first few days, 9-year-old Erinne worked with 14 different dogs. The trainers had already weeded out several dogs before having Erinne work with selected dogs during camp.

"We do personal profiling on all the dogs born here," explains Hopkins. "We don't have a person try out every single dog." Through poring over an applicant's questionnaire and the information on the dog's personalities, the trainers are able to narrow down which animal would most likely work best.

"The dog will become an extension of the person, so you want to match similar personalities."

Applicants come to the camp knowing that they might not leave with a service animal. The matching process is intense, as applicants have to study and learn about working with animals; the animals work with various individuals to determine a match.

Latte, a gentle 57-pound golden retriever, was the last dog that Erinne was assigned to work with. "I can still recall that Erinne had said she wanted a dog that wouldn't mind being touched and held," says Hopkins. "When she met with Latte, they had a really strong connection – that's impressive for how young she was. Latte just leaned into her."

Canine Assistants, which was founded in 1991, has placed over 1,000 dogs with people with disabilities. Each year they place about 80 dogs with individuals; more and more are children. This year Hopkins anticipates about half of their service animals will go to those under the age of 16.

Placing service animals with kids can be especially difficult because the dog has to see the child as the "alpha," or the person in charge; not the parent. Forging that connection takes just the right kind of individual – and dog. Often parents have to be heavily involved in training the dog.

Once the individual and the service animal leave camp, the work isn't over. Individuals need to constantly work with their animals to make sure that they'll listen – and obey – commands.

Placing a service animal with a child can do more than just help with independence: The dogs help children make friends more easily and, more than that, allow others see past a child's disability.

"If you think about it, when a child is in a wheelchair, (she's) capable of making friends – but then all the friends go to play on the playground and the child in the wheelchair is left alone," explains Hopkins. "But with the service animal, (the child) is never alone again. The dog doesn't see the wheelchair. He's only concerned with what's on the inside."

Hopkins also points out that for children, seeing a dog at school is "cool"; the child with disabilities is no longer the "child in the wheelchair" but the kid with the dog. "The dog can break down social barriers."

For Erinne and Latte, the adjustment to life at school came in steps. This allowed school personnel, students, teachers and Erinne and Latte to make the transition more easily. At first, Latte attended third grade with Erinne for an hour a day and worked up to four hours a day, before the school summer break gave the pair more time to work together. By fourth grade, Latte went along in the school bus with Erinne and attended full day, every day.

At scho
ol, Latte wears a vest that says, "Don't pet me, I'm working," so that other students understand Latte isn't a regular pet. Now that Erinne has progressed with training of Latte and both have become more comfortable and confident at school, Erinne lets students come up and pet Latte.

When Erinne headed to East Middle School in Plymouth for sixth grade, assistant principal Tara Botosan wanted to make the two feel welcome – but she also knew that students would need to understand the relationship. During the opening assembly, Erinne and Latte were introduced. Students came to understand that Latte was no pet: When she was at school she was working and they needed to treat her as a service animal.

Other concerns were quickly cleared up – a staff member who is allergic to dogs was never scheduled to be in the same part of the building as Erinne and Latte; Erinne's nurse takes Latte for the occasional potty break; and, as for barking, Botosan's never heard a peep out of Latte – who can often be found sleeping at Erinne's feet during class time.

"Erinne herself is extremely personable," says Botosan. But she's also noted that with Latte in tow, kids are more apt to approach Erinne. "Some kids have never seen anyone in a wheelchair before, so Latte helps them see past that. They are a package deal." Botosan points out that when the two are apart – for instance, during school pictures – Latte becomes unhappy.

"If there's anytime Erinne's not around, Latte's lost. She freaks out looking around and trying to find her. Their relationship is very, very sweet."

Williams is uneasy when she thinks about what's ahead next year – a high school campus with three schools and over 6,000 students in the Plymouth-Canton School District, with her daughter trying to find her way around.

Still, she trusts that with Latte by her side, Erinne will be able to navigate her way through high school doing what all high schoolers do: Making friends, taking tests, sitting through classes – just with one not-so-small furry companion to help.