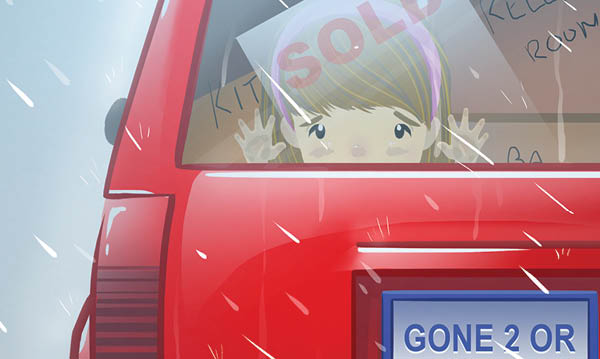 New city, new home, new school, new job – moving can be tough on everyone in a family. But once the boxes are unpacked, adjusting to the new move can be especially hard for tweens and teens.

In fact, a new study in the American Journal of Preventative Medicine notes that children who moved between the ages of 12 and 14 had higher rates of attempted suicide, mental illness, substance abuse and criminal behavior later in life.

But it’s beyond a new move. The circumstances and environment make a bigger impact, Roth says. Moving due to the loss of a job, divorce or death can have a negative effect on a child’s well-being, adds Judith Malinowski, a psychology clinical coordinator with St. John Providence in Novi and Southfield.

Plus, if the move takes place during the tween or early teen years, when kids are going through so many internal changes, “It’s like the perfect storm that comes together,” Malinowski adds.

While the new findings don’t give the reasons behind each move, these could be factors for the adolescents who had problems years later.

How can parents help children prepare for and adjust to a move?

Think about your first day at a new job. Take the feelings you have and multiply them by 100. That’s how your tween or teen feels about their big move, Malinowski says.

While parents get adjusted to a new work place and establish relationships, kids have to connect with a new peer group after losing a familiar one.

This takes thing to another level, Malinowski says. “I think there are so many changes that are going on anyway – whether it’s changing schools, hormonal changes, going through puberty, pre-puberty – and with that, it creates a lot of confusion.”

Hormones, body changes and the lack of control over both can be tough enough for kids, so it’s imperative that parents take these things into consideration.

While your teen may be difficult to approach during this time, both Roth and Malinowski urge parents to keep working at communication.

“In my opinion, the most important thing is to talk to your kids and make sure you keep that conversation open, even if they push you away,” Roth says.

“One of the aspects of depression is there is a sense of helplessness and hopelessness,” Malinowski says. Kids feel helpless when parents make a decision to move without their say.

While they can’t control the move, there is one way to empower your child – it’s as simple as letting her choose the paint color for her new room, Malinowski says. Before the move even takes place, parents can get to know the new city and search for activities for their kid, as well.

Roth and Malinowski recommend getting involved at school. Tour the new school and meet with your child’s teacher. Drive your child through her new neighborhood, too, so she can get familiar with her new stomping grounds.

Kid involved in sports? Children are often more connected with peers on their school teams instead of the neighborhood, so it helps to plan ahead on involvement, Malinowski suggests.

Once you’re all moved in, do your best to lead by example.

“The environment that the parents create is paramount,” Roth says. “Keep it as positive as possible and to make sure that you’re validating the child’s concerns and questions.”

Be aware, Malinowski adds. Don’t hover and ask, “Are you OK?” all the time, but do look for signs of isolation and anger.

“You are warding off a larger issue if you’re more proactive,” Roth says.

This post originally appeared in the July 2016 edition of Metro Parent and has been updated.

Tips on How To Connect With Your Teenage Son

10 Michigan and Detroit Urban Legends to Spook Your Teens