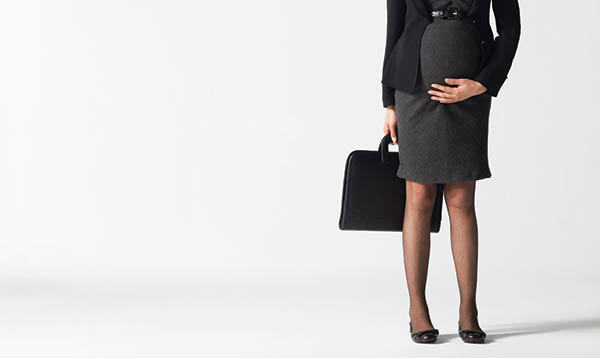 Not all pregnant women develop that “glow.” Many are dealing with nausea, swelling, fatigue, pains, stretch marks and insomnia. But staying under the blankets for 40 weeks isn’t reality. Local moms give tips for surviving pregnancy at work.

1. Sharing the news is a personal preference.

Erin Sudrovech, associate director of alumni and community engagement at Oakland University and mom of two, says when she found out she was pregnant with her first baby, her goal was to keep it to herself until she made it to the second trimester, which is about 12 weeks.

“I was talking to some co-workers about eating extra vegetables, and one of my co-workers asked me if I was pregnant. The look on my face must have given it away,” Sudrovech says. “I marched into my boss’ office and took her with me. I said, ‘I’m pregnant, but it’s early so don’t tell anyone. I haven’t even told my parents yet. I will tell you when I’m ready.'”

2. Morning sickness can last all day.

Rachel Briggs, a graphic designer for FirstMerit Bank in Southfield, got a lot of advice for dealing with her morning, afternoon and evening sickness in the first trimester.

“I have about an hour commute to work and an hour home. I could get sick anytime or anyplace,” Brigg says. She tried sour drinks, crackers and gum – she even wore Sea-Bands, for motion sickness – but nothing helped. “Mostly I was just prepared with a bowl in my car and my trash can near my desk.”

Briggs says the sitting while driving to and from work and at a desk all day can take a toll. “During my last pregnancy, I bought a bean bag cushion for my feet. I also needed good lumbar support and to lock my chair in a straight position.”

Nikki Little, a social media account director at Identity marketing in Bingham Farms, was mindful about her attire, too.

As the only graphic designer at her previous company, Briggs knew her leave would pose a challenge. She made a plan, presented it to her boss and helped locate and train a temp.

For her second pregnancy, her employer wasn’t worried. “I decided that I would focus on buttoning up anything I can from my side and just make sure that I’m taken care of.”

Little, pregnant with twins due in April, got word from her doc to stop going into the office in mid-December.

“I literally created what I called ‘Nikki’s Client Bible,’ which was a step-by-step binder on what was going on with each of my clients.”

Being clear about boundaries is key, the three agree.

Sudrovech let her employer know it was OK to contact while on leave “if it was going to be easier to have a 10-minute conversation” than hunting down info. She also checked email every so often to dump junk and deflect pressing items. It was all on her time, she stresses; her voicemail and email auto-response indicated she was out of office and not working.

Little, who had a longer leave, returned part-time by mid-August and full-time in spring 2014.

“I got back into the swing of things pretty quickly,” she says, “but we had the communication channels open from the beginning, which I think is really important.”