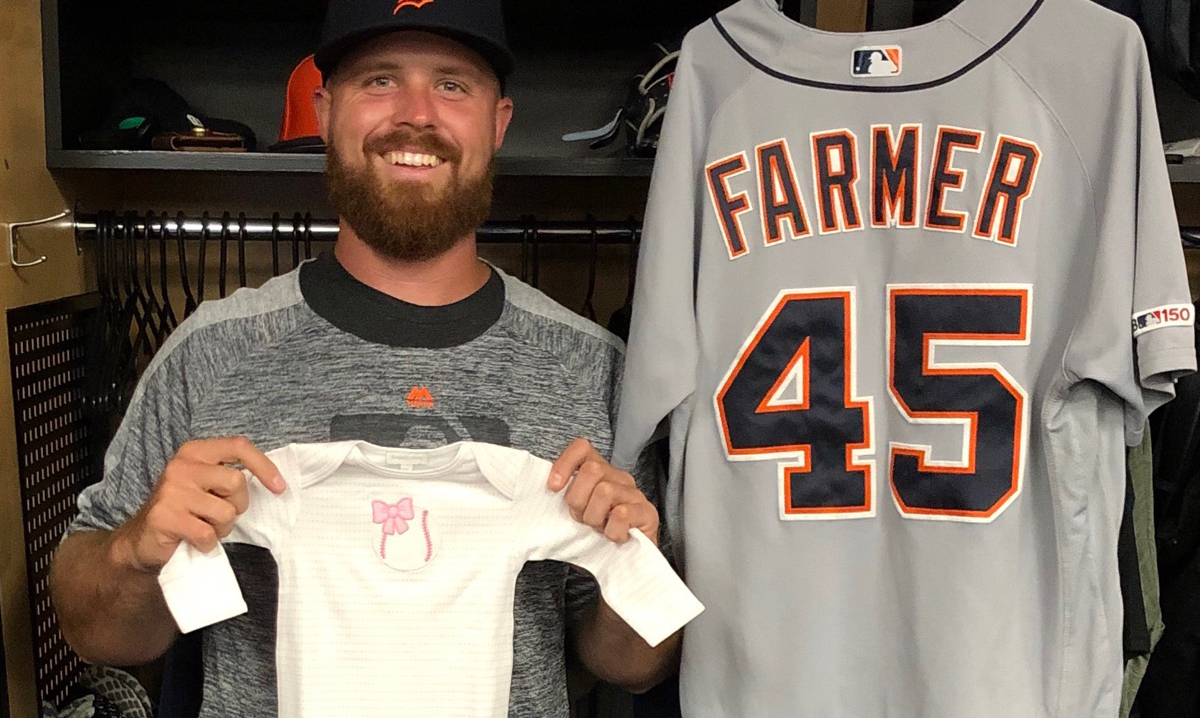 He and his wife Kayla are expecting their first child, a baby girl, in November 2019. After trying to start a family for two years, the news was a welcome surprise for the right-hander, who was drafted to Major League Baseball in 2013.

“We had kind of exhausted almost all of our options besides in vitro, and we actually had an in vitro date set for this off-season,” Farmer says. “God willing, it ended up happening naturally this spring training, which was really incredible.”

Any pregnancy is a “huge blessing,” he says, but the wait made the news even sweeter.

“She called me and she was crying,” he recalls. “I was like, ‘Oh no, the dogs must have chewed something up in the house.’ I was bracing myself for the worst – and then she FaceTimed me and showed me the pregnancy test.”

He quickly realized his wife was crying tears of joy, and he was blown away.

“I’m excited to be a father,” Farmer beams. And sharing their story that pregnancy doesn’t always come easily feels important.

“My wife was kind of beat up about it a little bit here and there, and I just told her that it’s not out of the ordinary nowadays. We’ve had several family members and friends go through in vitro so it’s a really common occurrence, which is kind of shocking.”

Though he and Kayla aren’t setting up a nursery just yet – they’ll wait until off-season 2020 for that – personalized onesies have already been made with baby’s girl’s name: Evelyn Rose. Beyond that, it’s hard to prepare for the unknown.

“It’s one of those things that I think is really tough to prepare yourself for until that child is actually with you,” Farmer says. “You no longer have just the responsibility of yourself; your responsibility is providing for another human being and another life.”

But he does know that he wants to keep the family together as often as possible, even when it means traveling around the country during baseball season.

“I would actually like them to come with me, because baseball’s not going to last forever – and if I’m getting to see parts of the country or parts of the world that they might not get to see when I retire, I’d love to have them come with me,” he says, adding with a laugh that he’s “guessing there are some challenges” to flying with a baby.

Kayla, meanwhile, has one parenting goal she’s set on experiencing as a family of three.

“I know one thing that is No. 1 on the to-do list – she bugs me about it all the time – and that’s to take her to Disney World,” Farmer says. “She’s big into Disney. I know she’s looking forward to having an excuse to watch Finding Nemo again and Moana and all that stuff.”

Baseball season makes for a busy schedule, but the couple fits in their favorite routines whenever they can: breakfast at Atomic Coffee in Royal Oak, strolls downtown with their dogs and dessert at Jim’s Frostie Treats on 11 Mile.

“My wife and I love the summers there,” says Farmer, who has a permanent home not far from his hometown of Conyers, Georgia. “I can’t say that I’m gonna try to experience a winter there, but we love the summers up there.”

They also spend a lot of time in Ferndale and in Detroit, where they previously lived.

“It’s been neat to see the city kind of turn around a little bit and develop and see all the new stores, new hotels, when Little Caesars Arena got built,” he says. “It’s been really cool to see it kind of thrive.”

Farmer, who attended college at the Georgia Institute of Technology, has been with the Detroit Tigers on and off since he was drafted, fulfilling a lifelong dream that started when he was just a young boy. Though he played other sports while growing up, something about baseball stood out.

“I just fell in love with something about the sport,” he says. “I always gravitated and came back to baseball because I loved playing it.”

And that’s what matters when it comes to getting kids involved in sports, he believes. Let them find what they love, and don’t push it too much.

“I’ve seen all this stuff about parents getting in fights over a 7- or 8-year-old’s T-ball game. It’s just like, man, let the kids have fun. That’s what they’re there to do,” he says. “It’d be better off for the parents to drop those kids off and leave instead of sitting there and yelling at their kids and the umpire – and all of a sudden one thing leads to another.”

“My parents hated when I just sat in the house on a weekend. (Sports) just gets them out, gets them exercise – and, not only that, but I think it subjects a lot of kids to a friendly environment,” he says.

“You can make a lot of friends over the years. You get out and play one game of baseball, softball, soccer and they meet a friend that day – that friendship could last forever.”

Taking baby to the ballpark

Already dreaming of the first time you’ll bring your little one to a Tigers’ game at Comerica Park? Start planning now with these tips from Buck Farmer.

A ball flying into the stands can cause serious injuries, so families should always choose seats behind the safety netting. – “There are so many kids that get hit by foul balls or whatever it may be,” he says, and parents and kids need to be ultra-aware. “When you get hit with those baseballs, it hurts. That’s the biggest thing.”

The heat and direct sun are no joke. Wear sunscreen and drink plenty of water, Farmer recommends. – “When I see little babies or young kids running around with short-sleeve shirts, no hats and it’s scorching outside, I’m cringing and I’m hoping they have sunscreen on,” he says. And, he adds, “Stay hydrated.”

Comerica’s carousel and Ferris wheel are big hits with kids. – “That’s a pretty fun way to bring your kids down to the park,” Farmer says. “Sunday’s a great day to bring kids because they get to run the bases, too. It’s a fun way to give them a little treat, or a light at the end of a tunnel for a three-and-a-half-hour game they have to sit through.” 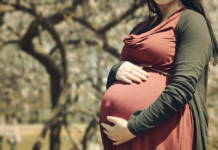 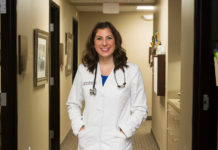