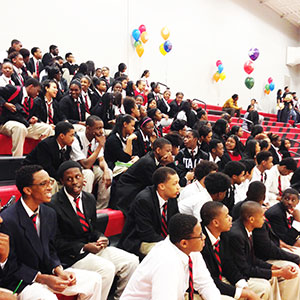 High school seniors all around the country announced their choice of college or university on Thursday, May 1, 2014 as part of the National College Decision Day – which is the official deadline for students to notify many colleges and universities whether they plan to attend that particular institution. And right here in southeast Michigan, Detroit Edison Public School Academy (DEPSA) Early College of Excellence took the big day very seriously to celebrate its very first graduating class with an action-packed assembly.

"This is our legacy class," says Shirley Brown, ECE's principal. So she wanted to make sure the event was extra special for the students who worked so hard to graduate and get accepted to a variety of colleges and universities.

"We're proud of you. We're excited," Brown says. "Everybody deserves a college education, but to commit and say you're going to go when you don't have to, it's a big deal."

The celebration kicked off at 9 a.m. as kids flooded the gymnasium to hear each senior formally announce his or her college choice (and decision behind it) – as that college or university's website was shown on the projection screen.

Representatives from Alma College, Oakland University and Paul Quinn College in Dallas, Texas, were even in attendance – to announce scholarships for several DEPSA ECE students.

Local radio station 105.9 served as the DJ for the event, which also featured performances by the school's choir and band. Raffle prizes, including gift cards, dorm-room gear and more, were given to students (and donated by school faculty). Other highlights included step performances by two Eastern Michigan University Greek organizations.

"We were just so grateful, because I think that's one of the culture pieces at universities. Those social organizations are a big deal, and they help students get rooted," Brown says.

The inspiration behind the assembly's format? The NBA and NFL drafts, Brown says. "There's always that big excitement about announcing what team you're going to play for," Brown says. "It was trying to recreate that kind of excitement."

And the assembly, which lasted nearly three hours, did just that. No matter which college they chose, bright futures are ahead for the graduating class of 2014.