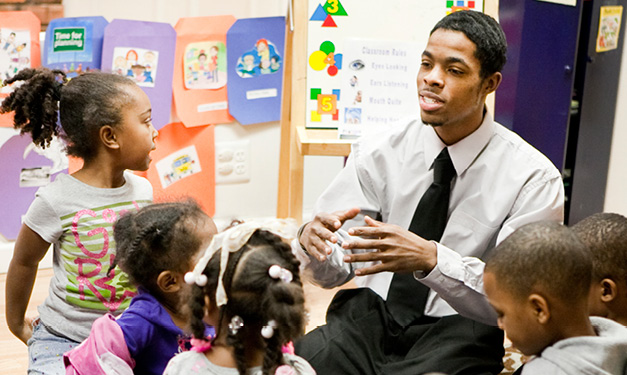 It's been a long week. Already, Ronald Jenkins has worked more than 45 hours and Friday isn't close to being over. He sits in a circle on the floor with a small group of preschool students, talking calmly about his job while watching over the kids.

When they start chatting or fidgeting, "Mr. Ron" as he's called around Little Scholars Child Development Center, calmly tells them to stand up, hold hands, spread out and sit back down. He sends high-fives all around to the smiling kids.

"I could complain like, 'I'm tired, I don't want to be here.' But just having the kids around, … every day I find something else rewarding," Jenkins, 24, says of his demanding job as assistant teacher.

Job: Assistant teacher
Years at Little Scholars: About one
Age: 24
Home: Detroit
Inspirations: His mother and pastor at church
Hobbies: Jenkins is everything from artist, clothing designer, musician, singer and poet to gymnast, aggressive inline skater, sports fan and skateboarder in his free time. Plus, he's part of a gospel rap group and goes to church three days a week. "I found myself dabbling in a lot of different areas."
Most rewarding part about his job: "It's so many things," he says. To sum it up: "Every day, I find something else rewarding."

Throughout his life, Jenkins has always had a love for children. "I always found myself more so drifting toward people younger than me for guidance and things like that – to see if they were doing something wrong or if I could teach them something."

Even at Little Scholars, Jenkins has found motivation in being a positive male role model for the students – something he hopes the kids will remember him for and take with them as they get older.

"It's actually very rewarding to be around the children and to watch them grow and learn," Jenkins says of working at the center. There are a few students in particular that have been at the school since he started about a year ago, and seeing them gain knowledge each day, he says, "it's really amazing."

Looking for a job, Jenkins went to Little Scholars on Grand River Avenue, where his niece was enrolled, touting his musical skills and hoping he could teach piano.

"I was originally hired in to teach the kids music, but as I started coming more, my boss, the director here, she saw I had a knack with the kids, so she put me in the pre-K room," Jenkins says.

That's how it all started. Now he's attending Henry Ford Community College for early childhood education while working as the center's assistant teacher.

As for the moment when it all clicked, Jenkins says there hasn't been just one. But one thing does stand out.

"The embrace of a kid when you walk in in the morning. Kids run up to you and they're so excited to see you," he says. "I don't ever remember having that much impact on anybody else's life."

His day starts around 9 a.m. His primary job is to help out the lead teacher wherever she needs it. With the preschool class being their biggest class, he's always looking to lend a hand. The kids are split into stations where they'll do hands-on activities, ranging from drawing to playing with clay. Through the day, Jenkins keeps an eye on the kids, interacting with them and making sure they are behaving.

"And also to make the learning environment fun as well as effective," he adds. "If it's not effective, it's all in vain – if they're not retaining anything that we're putting into them. So (I) try to make it fun."

And fun it is. Desiree Shannon, lead pre-K teacher at Little Scholars, notes Jenkins "is very creative with art and little projects."

"He is very warm with the children. They all love him," she says.

For Jenkins, working at Little Scholars goes beyond just assisting kids now. In a community where it's not uncommon for kids to live in single-parent households, Jenkins says he finds himself being a male role model to the kids at the center.

"From my standpoint – I know I'm not all the way there, I'm not a grown man yet … – but as much as I know, I would like to instill into them, so they don't have to go through what I went through as a kid – not having a father or not having strong male role models around," he says. "There (are) a lot of things that I came up lacking and missing because I didn't have positive male role models around. So the things that I missed, if I can give to them, then that would be awesome."

While the days are sometimes 10 hours long and keeping up with the kids requires a lot of energy, Jenkins says he loves it at Little Scholars.

"Sometimes you just don't have it in you, coming in there every day. You get drained, so sometimes you just have to have enough will power to blow past the fatigue and everything like that and your own personal feelings, because it's their future that's at hand," Jenkins explains. "I'm getting up in age and I had a great childhood, so I want them to have the same thing."

For the kids to one day remember him and what he taught them, "that would be rewarding enough," he says.

"If I can instill anything that's positive into them that they can carry on, that would be awesome."

From candlemaking to ceramics, these spots will keep the kids busy and creative.
Read more
At Home